As if my local comic book store was reading these posts (you're not, are you?) the issue of New Avengers that I missed while away was instore this week, huzzah! Now I'm only waiting on getting Hawkeye #3 to complete my comics collection.

Not that you're reading this, local comic book store, but, you know, if I find it in the store next week it would be totally cool. 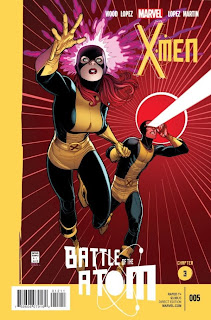 Here's a weird thing about cross-over events, they're cool and big and stuff like that but they also disrupt the flow of the stories on numerous titles. Case in point: Battle of the Atom. It flows across 4 different X-Men comics and also the stand-lone BotA comics.

Now, when all is said and done BotA will total 10 issues, which is not ridiculous by any sentiment. It's also an enjoyable read so far. but if you were only reading, say for example, X-Men by Brian Wood and no other X-title then you'd be thinking "what the fuck is this shit?!" because you really wouldn't have a clue what is going on.

Luckily, I've also been reading All New X-Men, as you know, so I'm enjoying the hell out of this. 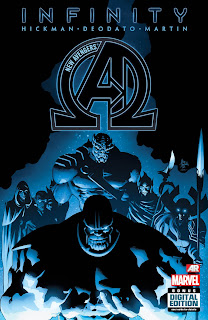 So this was the title that I missed while I was in Atlanta. Its another big cross-over comic and because I have read the following title in the event already it wasn't exactly necessary to read this one.

Now that I have though, I'm glad I did. It certainly fills out the Infinity story but is also vitally important to the independant New Avengers story as well so all-in-all it has a right to exist. And, clearly, the right to my money.

Also, Namor is a bit of a dick, isn't he? He always has been, macking on Sue Richards infront of Reed for years and screaming in Latin for the lols, but he's really upping his dick game.

"Upping his dick game". That's the sort of classy gold that keeps you folks coming back, isn't it? 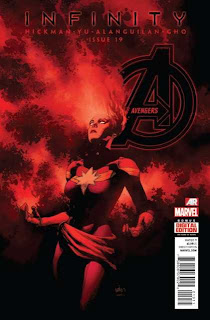 How bad-ass is Carol Danvers? Very, is the answer. I wasn't really familiar with her until Bendis took the reigns of Avengers many moons ago so I can't claim that I'm a long time fan but I'm definitely a dedicated convert.

I didn't realise that Captain Marvel got her powers from the Kree. It's a point that is brought up in this issue and it made me google some facts, so if nothing else Hickman has expanded my comics knowledge.

There have been rumours lately that Katee Sackhoff could play her in a movie adaptation and that sounds like great casting to me. Atlhough rumours being rumours I'm sure there is no truth to it.

This has been a tangent. 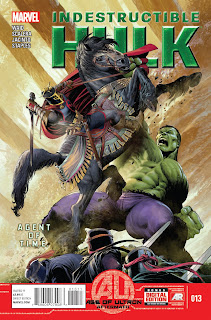 Get ready for another tangeant:

I'm fascinated as to what rules Marvel tags it's creators with. Sometimes if two artists work on the same issue it will be annotated with the word "and" and sometimes, like this for example, it is the word "with". Is there a reason for this or is it just chance? Is it judged on the kind of work they did? Or the amount? I would love to know.

I'm sure a Marvel editor is reading this right now, so drop me a line in the comments section below with your answer. Thanks!

Also, this comic is great. Hulk punching people in Camelot, it's like they dialed into my id. Added on top of that is a really cool plot twist at the end and... I'll gush more about the comic itself next time, I swear! 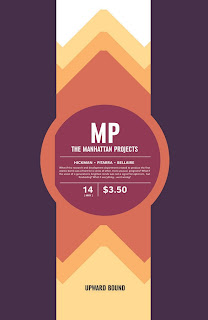 And to break up the Marvel fan-boy explosion in here... Another Hickman book! So, if you don't like Hickman or Marvel you're kinda screwed this week. Sorry, folks. Whattayagonnado?

Everything takes a turn for the "oh shit" this issue as the wonderfully creepy Oppenheimer screws over the rest of the team with a power-play involving the president. It works perfectly except that his multiple personalities may be turning against him. And this whole paragraph is the perfect reason why I love this book and why if you haven't started reading it yet, you should.