Aaron has been peddling his “comedy” wares on the Internet since 2007. First with the podcast Cabin Fever (w/ Brian Fitzpatrick), then he expanded to terrorize both www.needcoffee.com and www.asitecalledfred.com with his mad ramblings. Recently he even helped set up www.thewebsiteofdoom.com. So essentially, he is a website whore.

He is also bored with talking in 3rd person so he's just going to stop pretending that someone else is writing this...

I make lots of videos, guest on a lot of podcasts and write lots of inane articles. But because I do them in so many different places I've found it hard over the years to show people what it is I do without giving them a long list of links. I started this blog to make the whole thing a lot easier. Everything I do online will appear here and if I did it before I created this blog I try to add it here as I go along.


I wrote my first webcomic Hands Down with artist John Merker in 2010 but after a year of that stepped away from the art form. It wasn't until Buttonpress Publications reached out to me in 2015, to take over writing duties on their all-ages hero comic Artos with artist Jason Browne, that I returned to it. Now I write that and also the ongoing webcomic Ship Wrecked with artists Triona Farrell, Katie Fleming, and Rebecca Nalty.


Offline I've been a improv performer since 2013, first with the improv group A Suggestive Biscuit and now with Kill The Monster. I have been part of the sketch comedy team No Milk Day and co-wrote a different sketch show called The Craic Was Mighty which we brought to the Edinburgh Fringe Festival in 2014.

I've been taking part in Improvfest Ireland performing in 2013 with A Suggestive Biscuit, 2015 (solo), and 2016 with Kill The Monster.

I've also been taking part in Dragon Con in Atlanta, Georgia since 2008. I've been lucky enough to be on panels with the likes of Paul Dini, Dana Snyder, Doc Hammer, Joseph Scrimshaw, and more. So if you go to that convention and ever see a skinny blonde Irish man, come over and say hello! I'll be more than happy to give you a hug. 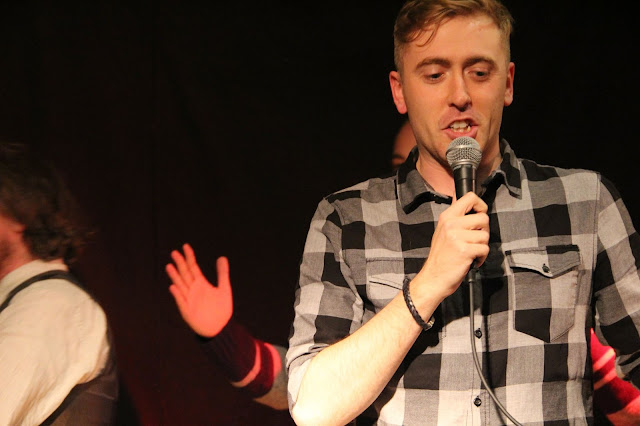 WHAT PEOPLE HAVE SAID ABOUT MY WORK

RE: my podcast Cabin Fever:

"The only thing that worries me sometimes and makes me feel bad is, Aaron seems to get glum if he feels the show isn’t going well. Which I think it is harder to enjoy the show when Aaron gets that way."

RE: my short comic For The Love of The Game:

“I read it a couple of times but it didn’t click immediately how the two pages were being used."

"Given that the issue sees the print debut of writer Aaron Fever, it is a very well put together book."
- David Ferguson IrishComicNews.com