I'm stealing this idea from my favourite ukulady, because she's smarter than me and I'm lazy. Also, she made direct eye-contact with me while eating dessert and since then my brain hasn't been working at full speed.

On Saturday night FRED hosted a musical/comedy concert which has gotten some attention online. All I was scheduled to do was help set the show up and hang-out back stage and lend a hand if necessary. However, a number of things would happen which would change that.

Through a long string of strange circumstances I ended up doing an impromptu Irish jig onstage during Paul and Storm's final song. Trust me when I say that it wasn't planned.

Then, Molly Lewis needed a music stand for some lyrics she had written for the show that night and I offered to fill in. That's right folks, I subbed for an inanimate object. But it did allow for me to make an entrance with Sylvester McCoy. He was to play the spoons with Molly but as his foot was still in a cast since his surgery he was going to ride on stage on his motorized scooter. I floated the idea of us riding together. He seemed to like it so that's how we rolled AND I'M STILL LOOKING FOR FOOTAGE OF IT.

This is the only photo I could find, post-entrance, of the three of us together. Of course, my head is turned away from camera. Of course. 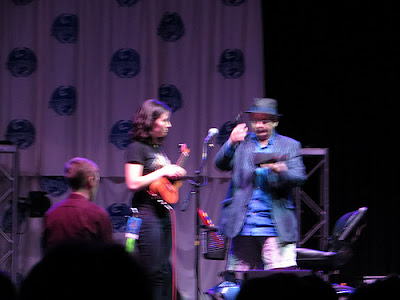 I was requested to say the above words by an audience member at the FRED panel on Friday. I still don't know why. Dragon Con is a crazy place.

On Sunday night, myself and Joseph Scrimshaw had the pleasure of trying out an improv show at Dragon Con. We were stuck for time and ended up having to squeeze it all into 15 minutes but somehow we pulled it off and it seemed to be a big hit with the audience. Oh and this was the audience. 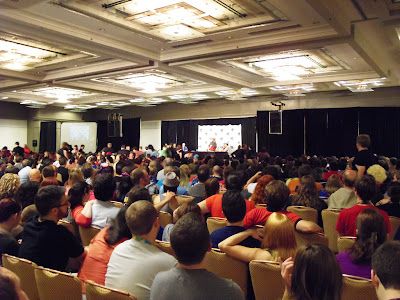 I've argued with people over the size, so for now we're going with the median 800. Needless to say, it's the biggest crowd I've performed in front of before. Gulp.

It helped that me and Joseph got to play with Bill Corbett, Paul and Storm, Mike Phirman, James Urbaniak, and Phil Lamarr. Phil was our final guest on stage and we told him he was a Sex Ed. Instructor and handed him some condoms and plastic bananas. The result was hilarious and I plan to get my hands on the video a.s.a.p.

Here is a picture of the end of our improv show with all the guests involved. 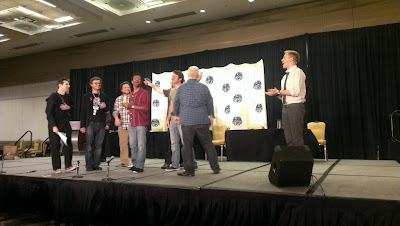 Every year we think nobody is going to come. Every year it's a packed room. We never know what we're going to say and we always walk away thinking we didn't get enough time to talk. I love it, and it's always thanks to the fans who come. They're great.

We had a private party on Friday night and hooked up a karaoke machine in a room. We just invited some friends and didn't make a big deal of it. We started late and things went quite slowly at the start. I began to worry that it may not have been a good idea but then the karaoke machine broke and started to play songs at random and without stopping. Somehow it made everything better. My sister-from-another-mister Amanda took some phone footage of the climax, I'm quite proud of my mic dropping ability. Even if my singing ability is quite shit.

I was very worried that I wasn't going to be able to make this show. I skipped out of the previously mentioned concert early to see these guys play their last ever gig. Luckily, I had been tipped off by Miss Lady Flex earlier in the weekend as to their start time so I arrived with minutes to spare. And thank god too otherwise I would have missed a night of debauchery and dance music the likes of which we will never see again.

Rest In Peace, Le Sexoflex, you will be missed. 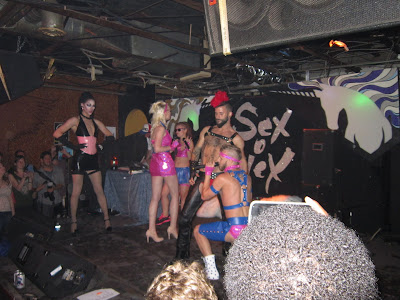 I got to meet, very briefly, Karen Prell who is the original Red. To talk to a muppeteer in any shape or form is a real privilege and I'm pleased as punch to have done it.

Monday saw a trip to the Georgia Aquarium. Myself, Ken, Molly, Ben, and Joseph all took the short journey. I was very excited about it as it was the first touristy thing I've done in Atlanta after 6 years of visiting. Plus, FISH!

Here is a picture. 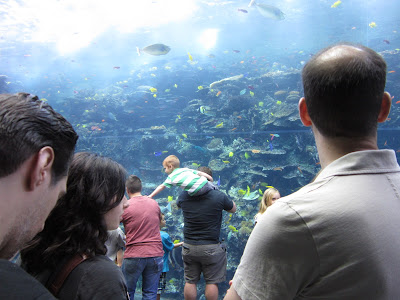 Yes, I took a picture of my friends looking at fish. I'm that sort of a creeper.

Anyway, we spent about 25 minutes of our trip just at the otter enclosure alone. Joseph had a hard time getting pictures of them and started to take it personally towards the end. A good time was had by all.

I stated on my Facebook page that I wouldn't be able to make it to next year's Dragon Con due to the financial burden of it all. Since then I've received a lot of feedback and encouragement from folks hoping that I can still go. At the moment it's still looking unlikely but I got some good advice about how to possibly make it work from the king of Kickstarter, Len Peralta. And it took him about 30 seconds to think of a plan too. The dude has skills, let me tell you.

I could have listed a million more things like the nice compliments I got from cool people but it's hard to keep this list readable already. Christ, you wouldn't believe the amount of text I cut out before finishing! Anyway, hopefully I can arrange something for next year, we'll see.

A big thank you to all the Dragon Con staff who help make all the magic happen, and also a big hug to Jon Boutelle who works like a dog every year to help record it all so that we can show you when you we get back. With his help, I hope to post some video of the above events.
at 01:04