Part One contained only Marvel pick-ups so I think it's appropriate that Part Two is solely indies. Two Image titles and a Vertigo. Oddly, they're all third issues too. 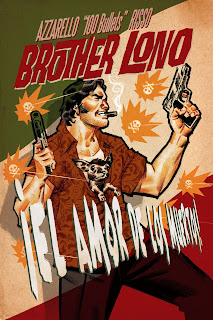 For those who don't remember: Lono was the biggest asshole imaginable in the 100 Bullets series. We now see him, an undeterminable amount of time since then, as a holy man in Mexico. It's a surprising set-up but it kind of makes sense.

Lono is one of the few characters to walk away from that book. He was then the good-guy-turned-bad. To have him now be the bad-guy-finding-redemption is a nice arc, a positive arc which is something you don't often see from Azzarello, but will it end well for him?

Fans of Azzarello will tell you "no" because that's just not what he likes to write. Wanna be compelled? Want to be shocked and engrossed? Azzarello is your man. Want to feel good? You need a different writer. This will be your only warning. 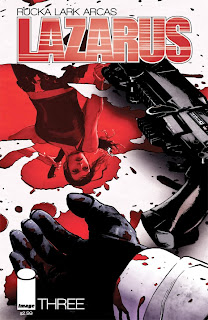 I continue to be fascinated by the world building that's present here. Rucka has designed a future that has more in common with medieval society but still has all the intrigue of modern corporate screw-jobs. Add to that the human genetic experimentation and weird incest references, you really have to admire the scope that Lazarus is creating. 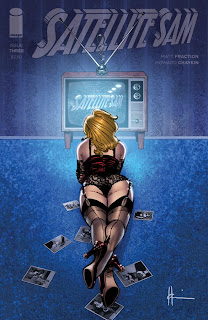 I truly believe Satellite Sam is a rarity in comics. A sexy story that isn't graphic or gratuitous in it's art.

The plot-line of SS is that a television star dies in suspicious circumstances. His son finds a ton of secret pin-up photographs his father has taken of ladies in various states of undress. As the son tries to figure out his father's secret life he realizes that his father's killer is one of the girls in these photographs. It's a solid story.

Set in the 1950s it is full of all the excess that modern audiences have come to know and love, thanks to shows like Mad Men. Add to that Fraction's ability to write people with shady pasts and you get a cast of characters that ooze appeal.

I wish I could adapt this to a television show or a movie. It's the type of thing that would be a dream to direct.
at 18:58