Loads of comics this week, including a graphic novel lent to me by my friend Tom who is an indie comic aficionado (despite his tendencies to only call them graphic novels). 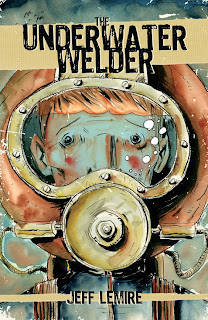 I hadn't read anything from Lemire before but this came highly recommended and I'm glad I was given a lend of it. The eponymous character is awaiting the birth of his first child and is simultaneously going through a bit of a nervous breakdown as he struggles to deal with the death of his father when he was 10 years old.

The story is a wonderful character study with a bit of a Twilight Zone style story. Jeff's obsession with diving, his father's profession, is also the crux of everything that goes on. It's what he uses to distance himself from his wife, it's the cause of his father's death, and it's what causes his dreams where he tries to piece back together his mind.

There is a nice metaphor of the pressures associated with sea diving and and it's connection to the pressure of becoming a new father and starting your own family. This is a personal story told perfectly. 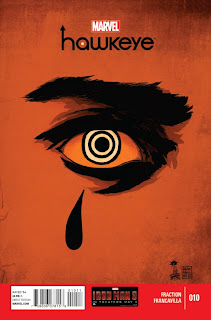 As I spoke about with #9, the fun has come to an end and everything is about to get real. This is the issue that we learn all about the new villain on the block and how he relates to Clint and Kate. There is no doubt that Barton has gotten himself waist deep in trouble over the course of the whole series so now is time that it starts biting him on the ass.

Despite being introduced to this new bad-guy with an origin story, he still feels quite mysterious which is no mean feat considering we got his history from childhood. There is a nice parallel to Barton's past as they're both ex-circus kids and his flair for the dramatic will be fun going forward, his image alone is a striking and memorable one.

I really miss Matt Hollingsworth on colours in this issue but this is still one of Marvel's best comics right now in my eyes, with it's main competitor being... 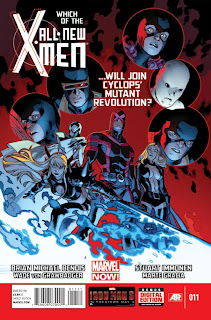 If I'm honest, more could have happened in this issue and I'm starting to get a little annoyed with the extremely slow story now. Don't get me wrong, it's still endlessly fascinating and the writing is solid without a doubt but I feel like we're dwelling a lot. Brooding. Self-indulgent even. I mean... somebody punch someone already!

The Avengers will once again stick their noses in next issue so maybe my wishes will come true.

Past-Angel is the character to join present-Cyclops' team and it's a logical step. Hopefully past-Warren has better luck in this time-line than his current counterpart... and I can't think of a better way to phrase that sentiment. Bloody time-travel! 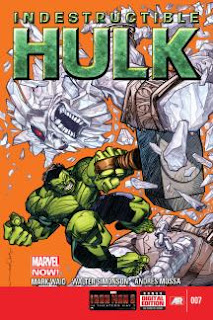 OK, I tried not to bitch about it last time but I really can't take any more. The art in this is fucking awful. I'm not going to direct all the blame on Simonson (although he must take his share) the colouring is also terrible. Each panel is a mess, it's so difficult to make out what's going on in any of the action scenes and the point-of-view is so badly chosen repeatedly that I genuinely felt angry with trying to read the thing before I got even half way through.

It's so poor, I've read better fan-comics online. I can't believe people are getting paid for such poor work. You'd maybe accept it on an indie title or even a less popular character's series but this is the main Hulk comic right now. It's ridiculous!

I cling on, purely on the basis that I know this art team is only here for a short time and a rather slick looking team is on the horizon. But god-damn, it can't come soon enough. 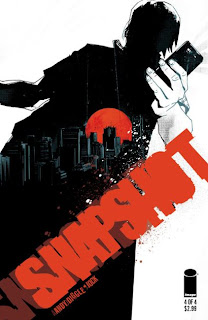 And so Snapshot comes to an end. It was an interesting story but it always felt a little rushed.

There is a letter at the end of this issue from Andy Diggle about the story and how it came about. It seems it has been on a back-burner for many a year and was originally designed as a movie script. Considering the twists, turns, and action of the story it's not surprising, it would make a great film. But as this was a pet project between two old collaborators they waited to squeeze it in to their busy schedules whenever they could.

I'm glad I read it but I'm filled with "what ifs" afterwards. The main one being, "what if they had been given more time to really flesh this beast out?". It would have, I can only imagine, been a bit of a classic. Oh well. 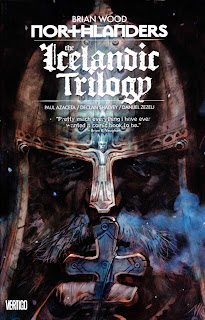 The Northlanders series has been kind of a dark horse in a lot of ways. I don't think it's gotten the attention of some of Vertigo's other hits but Brian Wood has been quietly churning out short stories of Viking ferocity and power for 50 issues. This collects the last of his run and it's equally as brilliant as it's predecessors.

The Icelandic Trilogy is based around the settling family of the Haukssons from 871 all the way up to 1260 across over 10 generations and numerous moves to gain and retain power on the island.

The writing, as always, is gripping and the trio of artists are all wonderful in their own way yet their different styles work together as part of the narrative piece.

Big shout out to Irishman Shalvey too, nice to see a Celtic brother doing his thing and on a fitting title as this.
at 17:10