It's a quiet week, this week, with only one issue out that I wanted to buy. This is good for two reasons. One, I'm broke. Two, it allows me to catch up on a book I missed out on last week. Apologies for the tiny, slightly blurry image for this cover, it was literally the only picture of it that I could find.

This volume focuses very little on our hero and is mostly about Rex Robot and Monster Girl, filling in the gaps of their history. It was great to find out what happened to them while they were trapped in another dimension but it also really fills out these characters and just solidifies this book as one of the best superhero comics around.

The reason why Invincible himself is sidelined during this arc is due to an injury he sustained from the Viltrumite virus and... well yeah, anyway, it allows other folks to shine and gives him and Eve some time to talk. That's one of the reasons why this series has been so consistently good from the beginning, along with the gory violence and crazy plots it has an awful lot of heart at its core and is often about relationships more than face-punching.

Sorry, that should be "extreme-face-punching". 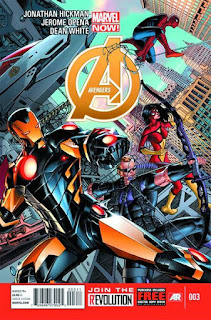 Huh... so that ended abruptly. Obviously I'm not referring to the series but this opening arc felt like it would run a lot longer than three issues but I guess I was wrong. Hickman, once again, keeping me on my toes.

The art is still wonderful (trust me, this cover is no indication of the beauty inside) and the concept is still sound. Cap and Tony declared that the Avengers need to be bigger and mission accomplished, they are now. In fact, a bunch of people showed up in this issue that I've never seen or heard of before! That's a great start.

If the conclusion to this adventure seemed too easy, it's possible that this is the whole point. If they expand, they are better and thus missions are accomplished easier. But this being a comic, I'm sure this new status won't last long...
at 15:28