Lots out this week. So much so that I had to leave the new Invincible trade paperback in the comic book store. It would have doubled the price of my purchases so I thought I'd leave it for a quieter week. When that will happen lord only knows as Marvel is releasing a lot of stuff fortnightly at the moment. I like the faster pace as it means the previous issue is fresh in my mind but it does mean I'm buying a lot at once. But trust me, Invincible, I'm coming for you. 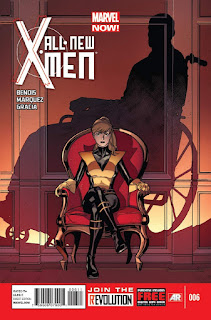 This week's issue focuses mainly on young Jean Grey and only a little bit on young Cyclops and young Angel.

I'm glad Jean is getting some attention. I've discussed in podcasts before how she has often been just the object of affection or a sideline character. Or at least, I've never found her interesting enough to think of her as anything more than that. But Bendis is really trying to expose her a little and in this issue we see a lot of responsibility being placed on her shoulders.

What I particularly like about this title is the awkward twist in my gut every time the kids are about to find out their future fate. For example this week Angel finally met his future self and asked why his future wings are steel. He doesn't really get his answer but I still kept thinking "oh, kid, shhhhhhh, you don't want to know". 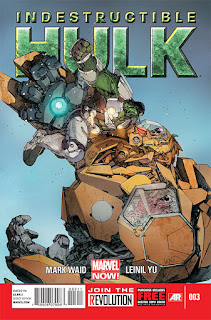 Mark Waid is the man behind the very successful Daredevil series reinvention. There he has taken the previously very dark series and has turned it around into a more vibrant superhero book. In a way he has done the same here.

Taking a cue from the successful Hulk incarnation in the Avengers movie last year, Waid writes a Bruce Banner trying to reclaim his place as one of the greatest minds in the world. To do so he has to accept that the Hulk is never going away so rather than try to cure himself he asks SHIELD to help him responsibly use up his anger so he can spend the rest of his time inventing and fixing the world's problems. It's a great concept and makes this the best Hulk series I've ever read, even with just 3 issues available.

It's nice to read Banner as more of a scientist than a victim and it's also fun to see Hulk being a weapon that SHIELD and co are excited to be working with. 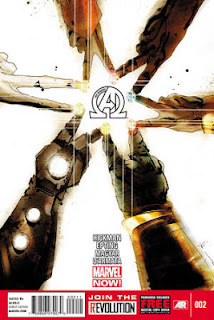 As I said previously, Hickman is the best science-fiction writer in comic books today but he's also a design junkie. So in this issue it shouldn't be too surprising that Reed Richards gives a presentation to the group of what danger lays in front of them using a rather nifty slide show presentation.
It's not a very exciting issue as this presentation pretty much devours it but it's such a convoluted idea that needs explaining and possibly reading twice. Sometimes I'd complain about being confused by a high concept plot but in reality if Reed Richards is talking to me about multi-dimensional science theory, I really would be confused as hell and would have to ask questions at the end.

Oh, and if you need to cheat off my results, my answer is: An earth from another dimension is going to crash into ours... I think. 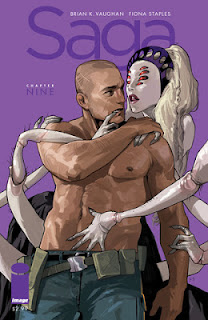 This book is AMAZEBALLS. Yes, I used that word. I'm down with the kids.

This is a science fiction, fantasy adventure about family and love. It's also one of the best designed space operas I've ever seen. A race of robots with televisions for heads. Spider-lady bounty hunters. Lie detecting talking cats. Ghost babysitters. Giant naked triclopses. It's bat shit insane and I love it.

This week sees us depart from our main characters and follow bounty hunter The Will as he attempts to save a young life. Considering he's supposed to be the bad guy chasing our family down, it's a complicated thing, but that's kind of what this book is all about. Don't judge people until you actually get to know them. Nice message for a space epic. Gene Roddenberry would agree.
at 12:15