We made it! The last releases of 2013! It's been a long year but I've now managed to write something about every single comic book I've read over the 365 days. Bloody hell. 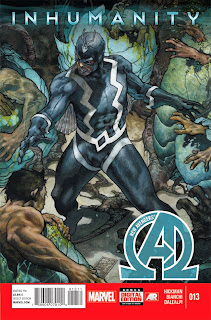 Hickman roots through his Fantastic Four bag of tricks for this story as he brings back one of Reed Richards' inventions from his run on the series.

The team use The Bridge to look at another universe to see how they're handling the apocalyptic incidents. The problem is that what they see is pretty damn scary.

Hickman has been piling on the doom with New Avengers since issue one and yet somehow he has managed to make things even worse in this issue. It's gotten to the point now that if this title doesn't end with everyone, everywhere, dying a horrific death I'll feel a little short changed. 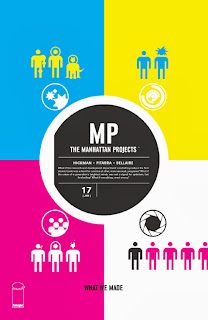 Joseph Oppenheimer is holding our team of super scientists hostage as he tries to take control of The Manhattan Projects proper. General Leslie Groves is being injected with a coctail of drugs by Oppenheimer as he milks him for information. All the while a genetically enhanced alien, who was captured by Albert Einstein and Richard Feynman, is roaming the space station and killing everything in its path.

If that isn't the type of story you'd be interested in, I don't think we can be friends.

I'm gonna go out on a limb and say that despite all the big work Hickman has done with Marvel this year, this is still his best title at the moment. That's for a number of reasons but I think it's the one title that's most within his wheelhouse. Hopefully he can find a better groove in his Avengers work next year.
at 17:25