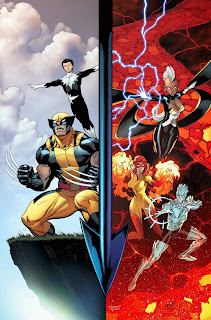 The fascinating thing about Marvel's comic universe is the way that they've woven mythical beings and locations from the real world into their comic world. Satan and Hell has featured in Marvel several times over the decades. In fact, they have a number of different versions co-existing with Mephisto, Hela, and so on. With so many heroes coming back from the dead too, there is a veritable rotating door to the afterlife.

This is where Amazing X-Men sources it's story. Nightcrawler is dead but that just means he's existing in these realms and once you find the door you can try to find him.

The X-Men stumbled across their door but now that they're through it there is no turning back and they're bringing our favourite blue fuzzball with them. 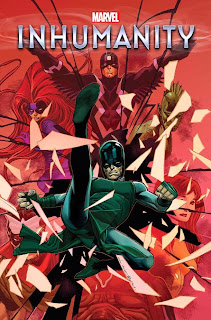 I forgot that Fraction wrote this. It wasn't until I started writing this article that I remembered. It should have been more obvious because Hawkeye actually gets some dialogue (he was significantly quiet in Hickman's Infinity).

After the grandiose, doom-peddling, super serious Infinity this feels like a breath of fresh air. Don't get me wrong, it's still a dramatic story but I get the impression we will have a lot more fun along the way. Fraction has a way of sprinkling some comedy in amongst the action that Hickman sadly doesn't.

I highly enjoyed this first issue and would recommend it to anyone even if they hadn't been reading the previous stories. Fraction and Coipel make a good team and I have a feeling this is going to get really good. 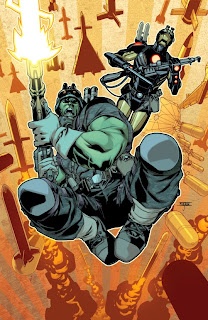 I like Jeff Parker. He writes very charming stories. I was a big fan of his Thunderbolts run and would love to see him take a stab at some more of Marvel's big hitters.

I'm also starting to become a bit of a fan of Mahmud Asrar too. This is the third Hulk story by the Turkish artist that I've read and he's one of the better artists (of many) to grace this series. I'm glad he got given the gig for this Annual.

It's a nice story that follows the friendly rivalry of Tony Stark and Bruce Banner, which has been a point of Waid's Indestructible Hulk run. Parker gives them a little more time together than they've had so far and gives them both an opportunity to reminisce about their motivations for getting into science and how differently/similarly they've approached it. 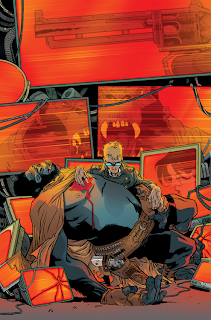 Sadly, this wonderful title comes to an end.

Things get a little metaphysical as Spurrier's story explores people's reliance on a narrative in both their lives and their entertainment and how each effects the other. It's hard not to smirk as Blue makes the decision to end his story and concordantly this one.

You can read a lot of different things into Six-Gun Gorilla, actually. It has a lot of layers and is really open to multiple interpretations. It turned out surprisingly deeper than the manic fun that I originally thought it would be.

I hope it gets a trade-paperback and a wider audience now that it's done. I think it deserves more eyes on it than it has gotten. 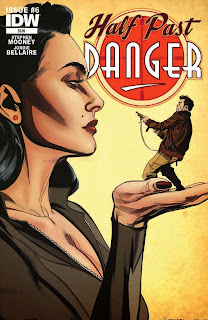 Another series comes to an end. This one is a little more shallow though. There's not so much subtext in dinosaur-stealing-Nazis, I guess.

Tommy "Irish" Flynn is battling for his life as he tries to escape the Nazi's clutches on the cargo ship full of dinosaurs. You could try to find a more dangerous situation but you'd struggle. Unless maybe the sea is made of acid. That might work.

Actually, I tell a lie, this is not a final issue for Half Past Danger, just the last one for now. On the final page it tells us that it "shall return"! And of course, people don't lie about those sort of things. The 1998 Godzilla movie ended with a hint of a sequel and it's coming any day now.