There were 7 issues out this week that I picked up. Seven! So to make writing about them a little easier I'm splitting this week's... low-down (? I can't call them reviews as I'm usually just blathering) in to two parts. Check back tomorrow for Part 2 which will feature Pretty Deadly, New Avengers, and the last issue of the Infinity event! 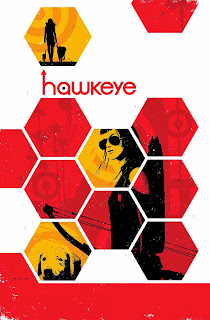 Annie Wu is going to go down in history as one of the best comic book artists of our generation. It's going to happen and I want it noted now that I said it. I enjoyed so many things that she did here. For a starters her expressions are second to none. Kate's faces are so spot-on and hilariously emotive that I could stare at them all day and smile. And her choice of panel design... seriously, just buy all her stuff and lets leave it at that.

Lots of really enjoyable little details throughout the issue like the Hawkguy heads buzzing around Kate when she gets a knock, Kate's Hero For Hire leaflet, and the "cat-food-man" looking unnervingly like Elliot Gould in The Long Goodbye.

And all of this doesn't even cover the over-all plot and development of Kate Bishop, which is also excellent. I absolutely adored this issue. 14 chapters in and Hawkeye shows no sign of losing it's momentum. One of the best comics of the modern Marvel era. 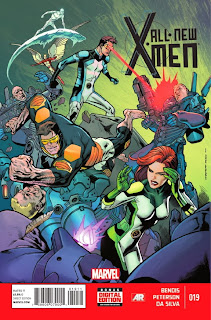 New artist on this issue, which is not unusual as All New has been pretty much fortnightly since it's release, although this is the first one on the title who I've disliked. He's not terrible or anything but he doesn't handle action very well and this is an action heavy issue so it results in a not-very enjoyable read.

Luckily, the plot ticks along regardless. A, possibly regular, bad-guy is introduced and we see the return of X-23 (who, by the way, I have absolutely no clue about) who seems to be suffering from both amnesia and a rather severe haircut.

As a rule I tend to dislike clones and parallel universe or time displaced characters. The X-Men are full of them though so it's something I'll have to get over. Besides, I loved the original Scarlet Spider so who am I to argue? 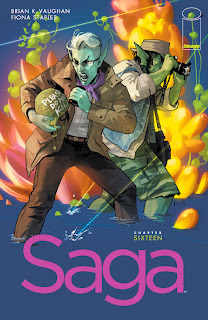 Sexuality is dealt with in a very mature matter-of-fact way. In a way, I think, that's better than the real world. There is little to no shame held by these characters for both their desire for sex and their sexual history. It's a really positive thing that highlights how bad we are at actually doing that as a society.

Another interesting thing, especially from a writer's perspective, is how the story is narrated by the grown-up Hazel despite the fact that she's a baby during the story. This give's way to a certain amount of locked facts. One being that she gets the chance to grow up but also some other nuggets of info she has told along the way. It can be hard to create tension sometimes knowing that you've given the game away on some things but Vaughan is more the capable enough to handle it. 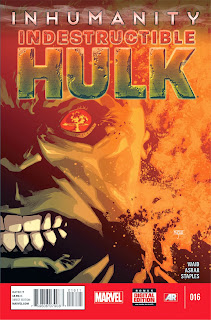 This is a series which has had a different artist almost every issue and when that happens I worry. Is it because the sales aren't great? Is it because the writer doesn't really care? Is it because the editors can't find the right match? Is the schedule too intense? The latter is probably the most likely but either way it makes me nervous.

After all the adventures in time, Banner is eager to get back to his science work. Reed Richards and Tony Stark, however, haven't stopped theirs and are beating him to the punch. So Banner decides to literally beat and punch some things to release the tension.

This is the first issue tied in with the Inhumanity event so we have a brand new thing to contend with but it feels like Waid is going to take a lead on it with a more character driven plot so hopefully it won't be more mind-numbing punching in Bruce's future.
at 13:40