Some good comics out this week but I fear I talk more about a specific real-life-issue than I do about the comic-book-issues. 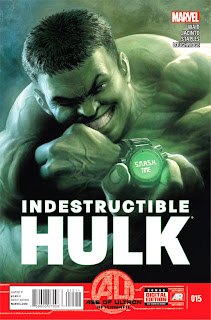 Hulk's time-travelling exploits come to an end in typical Hulk fashion, with lots of destruction. It was a good solid story and it brings up something that hasn't really been mentioned in the previous 14 issues: Betty Ross.

Betty is the love of Bruce Banner's life. She's the Mary-Jane to Bruce's Peter Parker. Things have gotten very complicated over the years, a bunch of deaths (for both characters), being exiled on another planet, and Betty became a Hulk herself. To say things are strained would be one hell of an understatement. 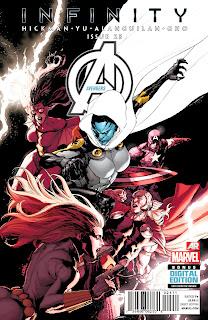 Lots of endings this week. This is the last issue of Avengers that will be apart of the Infinity storyline. When it returns it will no doubt be beginning another epic of some kind I'm sure. Rather than talk about Infinity, because it feels like I've been doing that all year, I'll instead mention what I'd like to see when Avengers returns post-Infinity.

This has been a universe expanding story and to be honest it has spent all it's time on plot and very little on character development. Hickman has introduced plenty of new characters but I feel like I barely know them and hear very little from them. I don't know if reducing the size of the team will be possible now with what Hickman has set-up but I think it has become a little unwieldy as far as what you can do with them. So, yeah, something a little more personal next time might make for a good change of pace. 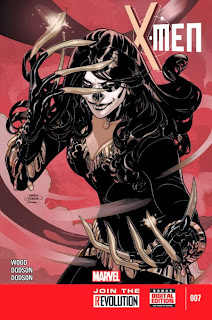 Oh boy... I've been dreading this.

There is a lot to be excited about with this issue. Monet rejoins the X-Men, Lady Deathstrike returns along with Typhoid Mary, cool stuff happens. However, all I can think about is Brian Wood.

Anyone who has been paying attention to comic books news online recently will have seen Tess Fowler stand-up to a major problem of sexism in the comic book industry as she recounts when Brian Wood acted like a douche-bag. It appears that it wasn't an isolated incident and that Brian Wood is a full on misogynist.

If it was a once off thing, a mistake someone made when they were young and he had learned from it, and admitted his mistake, then we would be fine. I was a jerk sometimes in my youth, I'd like to think I'm a better person now. But Wood has remained silent on the issue and there has been enough stories and confirmations about his actions that leaves a bad taste in my mouth.

But this has always been a conundrum. Does a man's personal life invalidate their work? If Picasso was a complete cunt in real life, would that make his paintings bad? At what point do you separate the two? Personally, I find it hard to enjoy someone's work if I know there is something fundamentally disturbing about them. So, despite having read a lot of Wood's work in the past, it is now forever tainted for me.

And then there is this title. I want to support it. It's a landmark for Marvel to be producing an all female X-Men team. I want Marvel to understand that they should stick with this sort of thing. But I also want them to know that I don't support the writer. If sales drop on this title will they know it's because Brian Wood is a dick or will they just think that all-female teams won't sell?

I'm sure my one sale is not going to matter in the long run but maybe there are lots of other people thinking like me right now. People who are confused and conflicted. I want the title to continue but to have Brian Wood, a misogynist, write an all female team feels like hypocrisy in it's highest form. 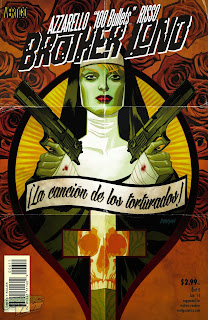 Another series with only two episodes left. This whole story has been about Lono fighting himself. Or his dark side at least. There was always going to be trouble in this dusty Mexican town full of gangs but the tension has been about whether or not Lono was going to crack and release that darkness from inside him.

Again, I know I've said this before, but a deep knowledge of 100 Bullets really is required reading for some of the subtle symbolism on play here. For example, and it's a little thing, but the word CROATOA was used to unlock the memories of Minutemen in that series. Lono tattooed it on his stomach as part of a plan which was pretty amazing. As a matter of continuity it is still there, but what is a fantastic touch is that we don't see it until the last page of this issue when, inevitably, we are about to see the old Lono become uncaged. It's a lovely bit of storytelling from artist Eduardo Risso and it made me smile like the complete fanboy that I am.
at 18:11