Comics Catch Up: Half Past Danger

I recently bought the first five issues of Half Past Danger but it was a while before I got a chance to read them. However, it's too good not to tell you about it so here we go... 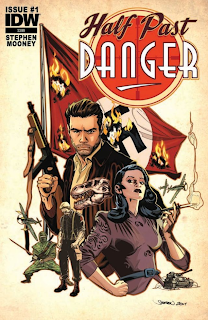 I'm going to try and give you a large amount of information about five issues of a comic book without giving away too many spoilers. Some story points will have to be addressed in order just to have the conversation, but most of which could be gleamed from looking at a cover or seeing a preview anywhere online so you should be fine.

First of all, I need to start off with the fact that I'm quite proud that this is by an Irishman. There aren't many of us in comics so it's always great to see one. 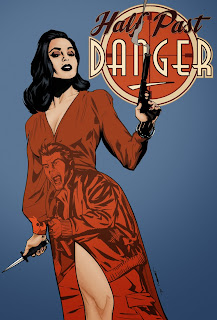 Possibly unsurprisingly the lead character is also Irish. His name is Sergeant Tommy Flynn and he joined the American army to fight in World War II. In the first issue we meet Tommy leading his platoon across the jungle of a South Pacific island in 1943. As they travel they stumble across a secret Nazi base amongst the greenery. Before they get a chance to act, suddenly they're attacked by dinosaurs.


There isn't much more plot details I feel necessary to fill you in on after that. I mean, that should really be enough to make you hand over your cash. So instead I'll tell you about all the other things going on.

Mooney tells the story in that modern pulp style. Think of any Steven Spielberg movie and you're pretty close. Actually, Spielberg has two films that if you crossed them would be a pretty accurate representation of Half Past Danger; Indiana Jones and Jurassic Park. Lots of thrills, lots of gristled men in khaki, and dinosaurs in jungles. 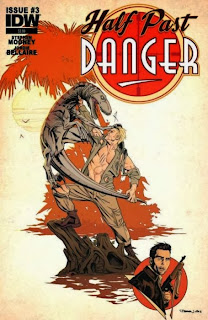 This is definitely an action story, the characters are pretty two-dimensional, they're merely there to hang the adventure on so don't expect too many big emotional twists. It's a diverse cast though.

- Irish Flynn who we spoke about previously is fond of a drink and a fight.

- The American Captain Noble has extraordinary strength and plays it by-the-book.

- British spy Huntington-Moss is the kind of femme fatale that men die for, literally.

- Ishikawa Minamoto used to be in the Japanese special forces but defected to lend his sword/ninja skills to the cause. 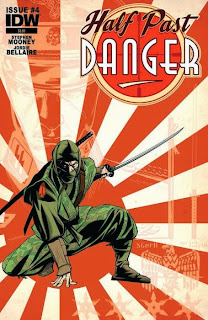 - Greta Schmidt is an Austrian pacifist who wants to study and preserve the dinosaurs living on the island.

One of the things I really love about the book is it's style. Did you notice on all the covers that there is very little white? It's all that faded cream/khaki colour. Even the pages of the book itself are that colour. It adds so much to the story in my eyes. It has both that military feel and also grounds everything in it's 1940s era. Very clever.

So if you like thrills and blood-spills I reckon this one is for you. Keep an eye out for it in your comic shop. It's IDW, so it should be easy to find as there are a ton of alternate covers. My favourite of which is for issue #5 done by Nick Roche. You can see it below. 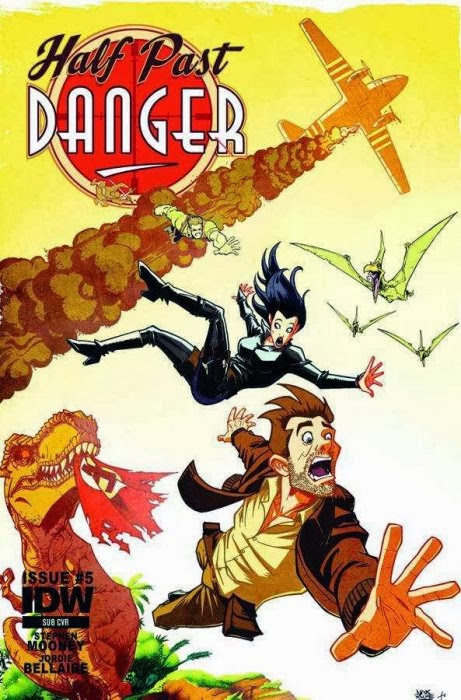