Not gonna lie, I'm kinda worn out from all the comic stuff. Still two more interviews to try and transcribe over the next week or two (they're long interviews and my free time is short). A week's break might be nice but then I'd miss out on all the good stuff! I said I'd do this for a full year and damn it that's what I'm going to do! 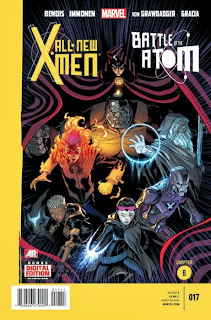 The time travel hijinks continue. I love the word hijinks by the way, people don't use it enough. 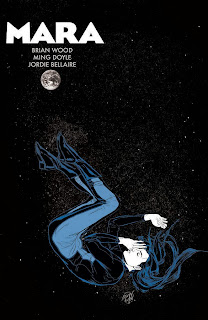 I was recently lucky enough to chat to Mara colourist Jordie Bellaire and when I mentioned that I was reading the book she asked me what I thought of it. She asked it in the way that told me that my answer would be scrutinized. I could be wrong but I think she was wondering if I "got it".

My answer (which I gave before reading this final installment of the story) was that it I liked that it was different. I liked that the eponymous character had barely any dialogue. This was an internal story, a personal one, and I noted that a soundtrack would probably enhance the experience.

I don't know if I answered it correctly. I got a big "oh yeah" response to the soundtrack bit though.

And yes, I totally name dropped like a douche bag up there but whatever. 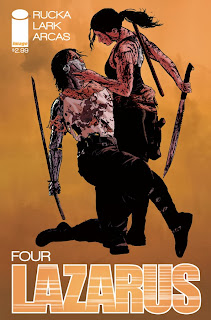 The colour of the cover image here is not the same as the copy I hold in my hands. I'm very conscious of that. I wonder where the difference lies, in the printing? Is my copy closer to Arcas' colours or is the digital?

I like that this is the second well written comic book I bought this week that features a female lead. The downside is that they were both written by men. So close yet so far. We're getting there, though.

If this comic doesn't have it's movie rights bought up within the next couple months I'd be shocked. It's the type of plot that would have broken records in the 80s. Action/science-fiction at their height. 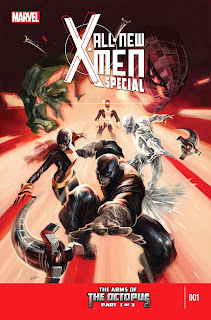 Special? What? No, your eyes do not deceive you. This is the second issue of All New X-Men out this week. But it's a special issue. Somehow. I don't know.

On the plus side, it's a fun a gorgeous looking story. The past X-Men go exploring in present New York city and unfortunately bump into Doctor Octopus. "But Doc Ock is living inside Peter Parker's body", I hear you moan and possibly spit at the mere mention. That's right, he is, so what is this retro looking Octopus doing? I smell a time travel mystery!

Superior Spider-Man shows up to punch himself in the face and try to decipher the mystery also. He calls in Bruce Banner and apparently this is going to follow into an Indestructible Hulk special and then presumably a Superior Spider-Man one. Good times.
at 00:11