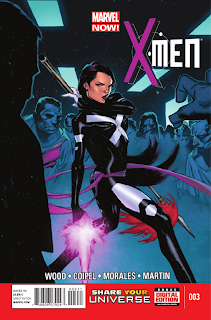 I'm glad to see that, admittedly only 3 issues in, this is going to be a fun series. Lots of action, great characters, and some good dialogue.

I'm going to make one of those flagrant, unfounded claims that the internet is so famous for. I think that Wood is going to catapult Jubilee back in to the type of popularity she enjoyed in the 90s and hopefully, while he's at it, sort out this whole vampire thing of her's. You heard it here first, people.

On a much darker note; Coipel is leaving the book and... (DUN DUN DUNNNNNNNNNNNNNNNN) David Lopez is coming in. So... meh? But I won't write anything off just yet. As long as we don't see the typical over-the-top lady bodies that comics are infamous for then I'll be happy. 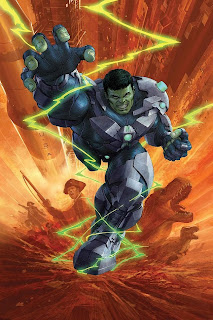 Just when I thought I was out, he pulls me back in.

I proposed recently on this blog that Mark Waid was writing stand-alone style stories and that I felt a little disappointed in the lack of over-arching story telling.

Well, I was wrong and I'm willing to admit it. There was a plan there and I just didn't see it. Either that, or Waid is a master at winging it on the fly. No matter the answer, I'm happy to see things come together.

Hulk takes a trip through time and is followed by Bruce Banner's conscience in a floating robot. Don't worry, it makes sense when you're reading it. Kinda. 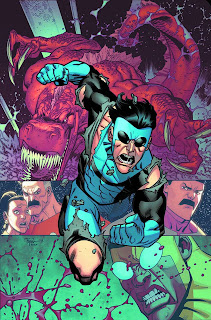 - Invincible vol. 18: The Death of Everyone (Trade Paperback)
- Written by Robert Kirkman
- Art by Ryan Ottley

The always fun and always violent series passed it's 100th issue earlier in the year and this trade collects #s 97-102.

I keep thinking I'll become desensitized to all the blood and guts and limbs being ripped off but somehow I never am. It's a testament to Ottley's magnificent art. He somehow makes me queasy every time.

The story never stays still but this trade in particular seems to shake everything up. A bunch of deaths, some new rulers, allegiances change, and some big big news on the Atom Eve/Invincible relationship side of things.

I think Invincible has been my favourite superhero book for the last few years bases on it's consistent high quality. Long may it reign.
at 14:10