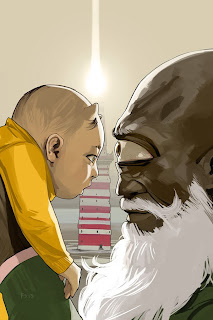 It also has the advantage of coming back from it's short break with the title of "Eisner Award Winner Best Series" on it's cover.

Seriously, if you're not reading this series you're not allowed to tell people you're a comic book fan. You should take yourself outside and flagellate yourself until your tears wash you clean.

This month, the family tries to come to terms with losing one of their own and once again find themselves in trouble when they touch down on a planet in search of their favourite author.

Meanwhile, The Will is still walking the line of being our villain/the lovable rogue we root for. It's complicated, yo. 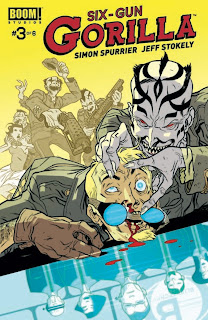 We're half-way through my favourite find of the year so far. There are better comics that I'm reading, but this is one of those comics that I know most people aren't reading. This is my underdog and boy am I ever rooting for it.

Our hero (? kinda, he's our protagonist at the very least) Blue has been captured by the rebels and they waste no time in slapping the crap out of him. 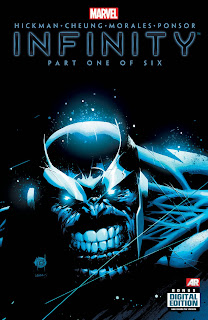 So here we are. The big event that is designed to get us ready for some Thanos shenanigans in the Marvel movie universe. When he appeared in the post-credit sequence in The Avengers movie there was a lot of "who?" questions from the non-fanboy public (which, lets face it, is the vast majority). It's no coincidence that the next big event involved big T.

I've been moaning a little bit recently about what was seemingly stalling by the two Hickman Avengers comics waiting for this but I have to say, boy, it was worth it. This should be an exciting one, folks.

As an aside; this issue came with a couple of cool items. A very nice mini poster by Scottie Young which is definitely going on my office wall and a badge featuring the cover art which you see here.
at 17:00