June 5th was the original release date for Hawkeye #11. The issue is entirely from the point of view of Pizza Dog, no, I'm not lying, and I was endlessly excited to read it (with no help from my friend Amanda who has been equally as eager). When I reached the comic shop and found no Pizza Dog I was in a panic. Had I missed it? Is it sold out? No, it's been pushed back a whole 3 weeks for release. Three. Weeks.
I sulked for the rest of the day.

But, here are the comics I did buy: 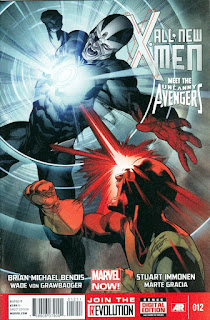 SPOILERS: The cover action scene doesn't happen. Not even a little bit.

But what DOES happen is a lovely brother scene where Alex gets to meet Scott at a time when he's not mental. If this comic does nothing but rehabilitate the image of Scott Summers in the comic-community, then it's still incredibly important. The character has been shat on by writers for far too many years and I think it's admirable that Bendis has found a way to cut to the core of Cyclops and remind us why he was the leader of the X-Men in the first place.

He's a good kid, he just needed to be raised differently, this is giving him that chance. 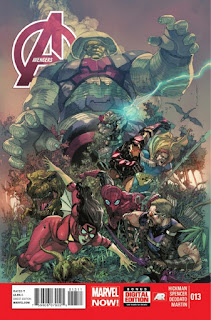 So the High Evolutionary is up to some of his (its?) usual tricks and starts using some of the alien kids as batteries. I'm slightly confused as to whether that's a bad thing or not though. I mean, when last I looked, these aliens are supposed to be kinda dangerous and an invading threat but the Avengers have decided to take them under their wing. It's all a little complicated.

Hyperion is centre stage again. He's a bit of a tricky problem. It's hard for Marvel to have any sort of superhero with a cape & heat-vision and not have the Superman comparisons come up. And for all sense and purpose he is a Superman facsimile. Same powers, from another world that has been destroyed, no family here on Earth etc. But Hickman is making a strong case for his involvement here and I'm begginning to enjoy him despite the little I know of him. 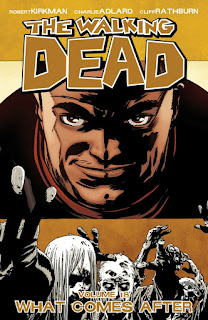 I really wish I had caught this series from the start and was buying month-to-month because the wait for trades now is excrutiating. Add to that the torture of reading the series and seeing your favourite characters punished constantly, trades can be a distressing length to get through.

However, saying all that, it's still one of the most consistently brilliant and enthralling comics books ever and will no doubt go down as a classic with legendary status.

I could sum up what happens in this volume but it's esentially "Rick and friends have more bad stuff happen to them, they make a plan, it may or may not work... probably won't" which is essentially every collected book since the first. 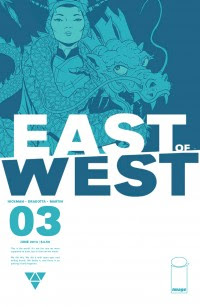 It's still early days for this series but you can already tell that Hickman has a definite end point in mind. It's strange to think how a book that began with the Four Horsemen could get more ominous but it has, all with the addition of Death's girlfriend.

There are lots of epic concepts floating around. Love. War. Honour. Fear. All with a lot of world building. It means that there are times when it may feel like too much is going on or that it's going a bit fast but I trust Hickman as he always manages to tie everything up in the end. There is no flab in his stories.

Hickman is also a machine these days too. There have been very few weeks since I've started this when I haven't bought at least one comic written by him. His fingers must be steaming.
at 19:32