With only three days to raise money for the game I wasn't optimistic that I would raise any significant amount. However, everyone was wonderfully generous and with thanks to you lot I managed to get together €160 by the time I went to the game. I'm incredibly grateful to everyone who donated and I want you to know that you renewed my faith in humanity. In fact, my day job donated another €50 after the game too which brought my total up to €210! As a result the game raised a total of €2500 and we couldn't be happier so give yourselves a round of applause.

As promised, there are some pictures from the game courtesy of AlanE. I'll just post the ones that include me but if you'd like to see them all just click that link. You can also click any of these images to make them larger! 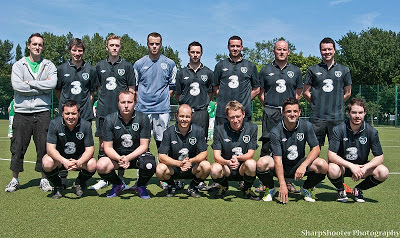 Here's my team. It was an incredibly hot day, 24C (or 76F for you lot across the pond), so we weren't jumping for joy to be wearing the black kit but what can you do? 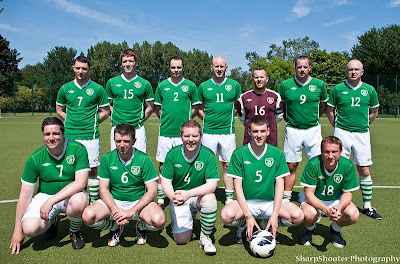 The enemy. Most of these lads play in a Eurofan team which plays regularly around Europe (I'm told) so we were up against it. 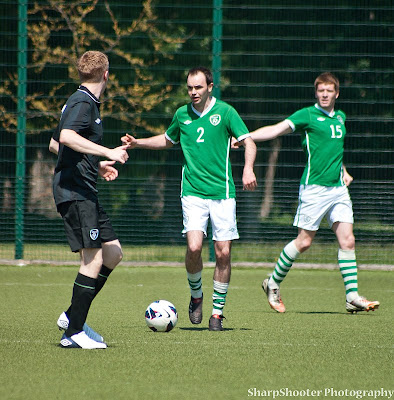 This is me running backwards to try and defend. A common theme of the day. They were all over us for the first 20 minutes. 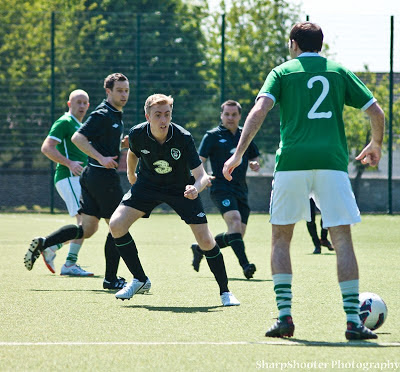 More defensive work. I was playing central midfield for a lot of the game and let me tell you, I don't have the legs for it anymore. I was fucking knackered trying to keep up with the game. Luckily the manager moved me further up front in the second half and I played better then but if you're wondering what my exhausted face looks like, it's this. 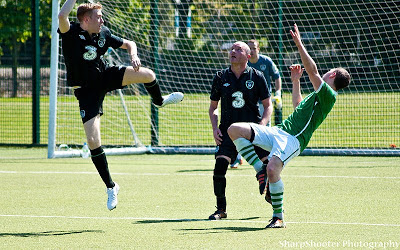 Listen, I have no idea what I was doing at this point. I may have been seeing things. I honestly don't think I was trying to kick this guy in the face despite how it looks.

We lost 2-1 in the end but I think we played well considering it's the first time most of us even met. My legs have been screaming in the two days after the game. I've been like a pensioner trying to move around. I hadn't kicked a ball in 5 years previous to this 90 minute game so as you can imagine I wasn't exactly prepared.

Big thanks to all the lads from YBIG who arranged and took part in this, they made it a huge success.
at 13:36