For the first time this year I had to decide not to buy some comics because I'm broke. Two comics, to be precise. One was an easy decision. I just wasn't that into the He-Man series. The other was a bit more painful. Greg Rucka is a writer I hold in high-regard since his outstanding work on Gotham Central so when his new book called Lazarus started this week I had planned to get it. But with four other comics already out this week on top of the new 100 Bullets spin-off I forgot to pick up last week, well, it was just a lot of money.

These sort of Sophie's Choices will happen more and more over the summer as I try to sort my finances out but for the time being I hope that next week will be a quieter one and maybe Lazarus won't have sold out by then. Maybe. 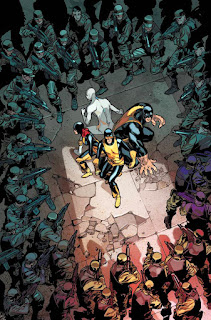 People always made fun of Bendis for writing very "talky" books. It was never a problem for me because 1) I'm a very dialogue heavy writer myself and 2) I've always enjoyed his dialogue.

Case in point, two standout parts for me this week were two pieces of dialogue.

In the midst of a serious conversation and planning going into a battle, Iceman suggests "I could make everyone real cold". That made me legitimately laugh out loud (I love Iceman).

Secondly, Kitty Pryde delivers a rather memorable speech concerning "Mutant" being a taboo word and how certain members of the Mutant community are reacting to it. Both Kitty and writer Bendis are Jewish so you can probably imagine the conviction in that oration. 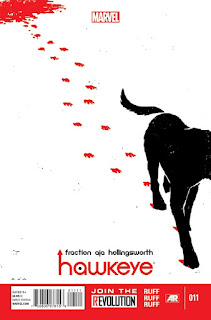 There was a very large part of me that wanted to just write P I Z Z A D O G a couple hundred times and make that my review but I actually have stuff I want to say.

For a comic book that (as Fraction puts it) is "about nothing" its quickly becoming a character defining run, much in the same vein as Bendis' time on Daredevil. Lets face it, Clint Barton was probably not the most fleshed out Marvel character in the past ten years, maybe even twenty, but Fraction is building a rich tapestry of life. We're meeting his friends, his tennants, his dog, his enemies, and now his family makes a return.

This issue is written entirely from Lucky the dog's perspective and somehow it makes perfect sense. If that isn't a shining example that Fraction is writing like his life depended on it, I don't know what is. 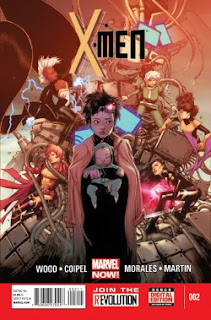 I made a big deal with the last issue about how important representation is in comic books and how proud I was that Marvel had made it's flagship X-Men title an all women team. But aside from that, if this move is to have any meaning, the comic has to be good.

Luckily so far it has been a blast. I think a big part of that has been the characters involved. Jubilee, Kitty Pryde, Rogue, and Storm are all great to read and always have been. They have dynamic and contrasting personalities and Wood is writing them to their fullest in big action set pieces that I would be shocked if anyone didn't love.

Psylocke I have always found dull but she is essentially a ninja and they're not really known for wise-cracks while Rachel Grey I barely know at all so it will be interesting to see if I warm to them as the story goes on. 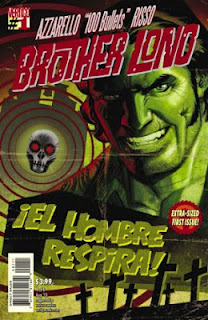 100 Bullets was the comic book that got me back into comic books as an adult. I hadn't read any since I was a kid and one day I gave a trade paperback volume of this dangerous looking book a try when on a break in college. It blew my tiny, shaggy hair covered mind. I soon became obsessed. It was, and still is, one of the best things I've ever read.

That series finished a couple years ago and, while I haven't stopped reading comics, I did miss it severely. To have a spin-off series come-out by the same team, following the craziest/sickest character from 100 Bullets, is a dream come true.

For that very reason, I may not be the most unbiased source for information about this one. As you can imagine, I liked it. 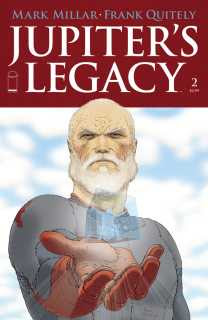 Millar's superhero world is dictated by fame and family.

I think Millar as a person is kind of obsessed with fame anyway. Anyone who has been following his exploits since Kick-Ass got picked up for a film will note his antics are kind of driven by attention. He'll drop names and recount Hollywood tales for pretty much anyone who will listen. So it's no surprise that his heroes in Jupiter's Legacy are all tangled up in the celebrity lifestyle.

The family part is possibly more interesting. A big streak through JL is the slightly Oedipal conflict between a father and son. There has been no mother fucking yet but this is a Millar book so its only a matter of time (hopefully this series strays away from the depths that Kick-Ass trawled with it's morality).