I'm writing this on a train. The future is now, kids!

The video has had (at last count) 15 million views so the chances of this being new to your are slim-to-none but Commander Hadfield has been such an endless delight online since he started his mission on the International Space Station that I would be remiss in celebrating his return to Earth and sharing his wonderful music video. He has inspired a new generation of kids to explore space via his Twitter and YouTube accounts, and quite a number of adults too.

It is, to my mind, the only music video made in space. That's pretty damn cool. We salute you, sir!

What happens when you let a homicidal maniac go speed dating? Why, this short film by Alan Rogers, of course! It's based on an Irish comic written by Derrick Domican. I've worked with Alan before and he's a great talent so it's well worth a watch, but be warned; some NSFW images.

3) Will Smith attempts to break the internet

Will Smith and his son recently guested on The Graham Norton Show in the UK. The last time he featured on the show we performed his Fresh Prince of Bel Air theme which got 8 million views. Will, as always, wanted to outperform himself so decides to take it up a notch. The man doesn't do things by half...

(At last check, this has gotten 14 million views)

I won't talk about Iron Man 3 as I did enough of that elsewhere but I will share this rather delightful video that Norwood Cheek and David Dutton made which is an 8-Bit video game version of the first Iron Man film. It was made for the Cinefix's 60 second(ish) challenge which gets film-makers to create minute long remix's of some famous films.

This month saw the season finale of Doctor Who air but not without a hitch. The BBC accidentally shipped over 200 blu-ray copies of the final episode early to people who had pre-ordered them. Worried that they might leak the details of the episode online, Steven Moffat said that if everyone kept the secret he would release an exclusive video of Matt Smith and David Tennant as a reward. Wonderfully everyone kept quiet and you can watch that video HERE.

So I shall leave you with this image from it. 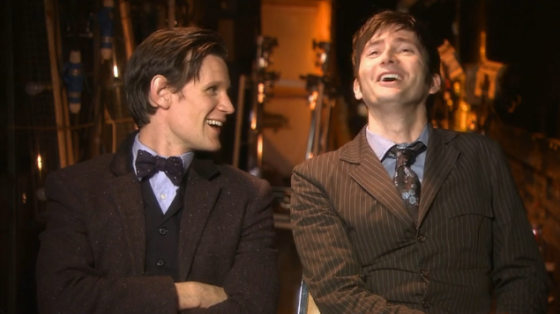 Roll on the 50th Anniversary special.