More Marvel madness as this week I pick up five of their titles and one Image comic. It's been mental the last few days at home so once again this is late to publish but some great stuff in this haul so lets get to it! 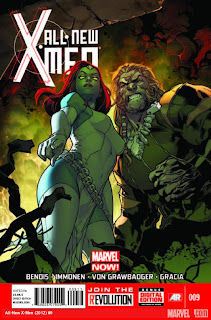 Some real highlights in this issue.

Kitty Pryde shows the past-X-Men around the danger room and introduces them to Sentinels for the first time. Bendis is writing the classic team magnificently. He really gets he dynamic of the group and shows it to full extent during this sequence/battle. It's reminding why the X-Men is such a great concept too. Seeing them as teenagers again makes me love them like I'm sure the readers did the first time round.

Oh and Iceman is essentially Spider-Man but with cooler powers (no pun intended) and without the heartache. There, I said it.

Mystique is starting to make her move and it involves Sabretooth who I haven't seen in years. In fact, there is so much "classic" X-Mening going on that this all feels a little like wish fulfillment in this book. Look may it continue. 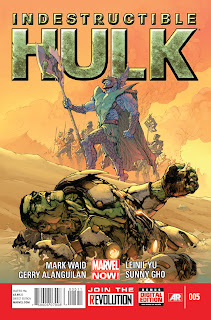 When last we saw the Hulk he was being dragged to the depths of the ocean by a big crazy sea monster thingy (technical term). There are plenty more big crazy sea monster thingys for him to fight throughout this issue but what I like about Waid's series is that there is plenty of Banner time too. We get the smashy-smashy but also some super-science and it's the dichotomy which a lot of writers forget about the character and how they some times run into a writing brick-wall.

In a lot of ways, Bruce Banner is very similar to Tony Stark. Brilliant scientists plagued by personal problems. It's the personal problems that make them very different too but it should no less provide an equal range of interesting stories but recently it seems Hulk has been written as a horror story rather than a cool super-hero. Thanks, Mark, for changing some of that.

This is Yu's last issue on art duties for a little while. He's being replaced by Walt Simonson next month and sees Hulk meet Thor. That's right, folks. Simonson is drawing some Thor again. Get ready for the reunion of a life time. 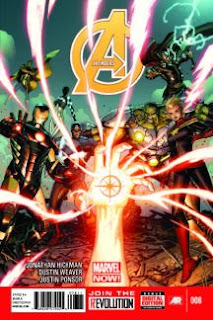 The group have a showdown with the new super-power on the block, Starbrand. There is nothing special in a sense about this duel. It's all part of what is a much bigger plot that is slowly coming together. There is some nice team interaction with Captain Marvel, Hulk, Cap, Iron Man, and Thor but that's to be expected, nay demanded, from an Avengers book.

What is exceptional however is Hickman's tapestry that he's building. Anyone who has read his Fantastic Four/FF run knows that Hickman is all about the long-game. With a couple of characters returning at the end of this issue he makes it clear that he has an opera planned for this and the fat lady hasn't even put her costume on yet.

Weaver's art is great by the way but I've no idea what he's doing with Captain Marvel's face. She looks like a Bratz doll. It's disconcerting. Stop that. 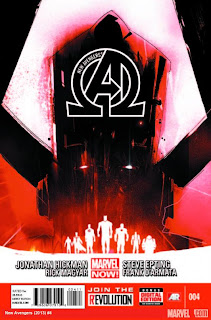 So there's a few niggling things with this one for me.

1) I'm confused.
Like, seriously. There is a lot going on with this series. Parrallel universes crashing planets into each other. It's science-fiction at a heightened level. But then guys I don't know show up and talk about plans that I don't understand and then fights that make no sense... Hickman, stop being smarter than me!

2) It's not really an Avengers book.
When New Avengers was lead by Luke Cage and was the street-level version of the team, it felt like an Avengers team. This doesn't. The group were formed during a short series by Bendis called "The Illuminati" and honestly, I would have preferred if they named this series the same.

3) Purple rain.
It appears the colour of the apocalypse is lilac. 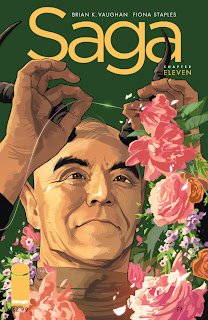 I think I'm running out of positives to say about this book. I'm just not verbose enough to keep talking about how amazing it is. So maybe I'll concentrate more on what's happening.

Marko and Alana are trying to out-run their bounty-hunter, even though I'm not entirely sure they know they're being chased by him specifically. They're just generally on the run. I guess that's what happens when you're a couple who are both AWOL and sleeping with the enemy. Marko's parents are still on-board and his father's secret heart problem becomes an issue.

Meanwhile on The Will's ship, the hull is breached and Lying Cat is floating in space. Can our villain once again be the hero? Oh the drama!

... Is it wrong that I imagined the above paragraph being read aloud by the 1960s Batman TV show narrator? No? Good. 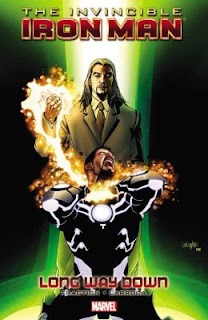 I spoke at length after the last volume about how Fraction's run on the series was linked heavily with Stark's alcoholism and I think I'm going to go a step further now and say that I believe it's one big metaphor for alcoholism.

Bit by bit, Stark has been stripped down. As the title suggests he's on his way to rock bottom. He has rejected help from his friends and his actions have caused them harm. He's currently fighting a losing battle against his oldest enemy and now he's lost control of his own body.

There are so many comparisons on so many levels that it's undeniable that Fraction has made Tony's battle with alcoholism into his battle with The Mandarin. It's wonderfully crafted and with the last trade of this series coming out in a few months I can't wait to see how he executes the finale.
at 14:36