Tomorrow night the Republic of Ireland will play Austria in a vitally important World Cup Qualifier. I'll be attending the game and I'm highly looking forward to it. Two men who were no doubt also looking forward to it where a pair of Austrian fans who visited Dublin for the match. They were taking in the Guinness Brewery tour during the day and were unfortunately mugged by some locals outside. Both their wallets and match tickets were taken.

Obviously this is a heinous, disgusting thing that's unfortunately all too common in our capitol city but the Ireland Fans Embassy posted a message about it on Facebook and the responses started to come in. 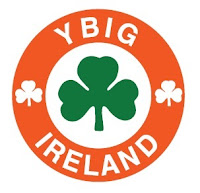 One response was from the Irish supporters group known as You Boys In Green, folks who organise pretty much all the positive fan events/initiatives for the team. They instantly took to their forum to see what they could do. Luckily, it seems the FAI have sorted the two men out with tickets but the YBIG fans have been chipping in and over 60 different people (at last check) have donated to help them recoup some of the money they lost.

They've been in contact with the two Austrian gentlemen and they have said that if they receive more money than they lost in their wallets they'll donate the extra to charity.

Football fans can often have bad reputations but it's nice to see that once again the Irish supporters do us proud. Well done for turning some bad news into good.
at 00:36