It may seem like I read nothing but Marvel in these reviews but honestly, my love for Marvel appears stronger than it is due to this Marvel NOW initiative. A lot of these books are coming out bi-weekly. Hence why the following books have appeared more than a couple times already... 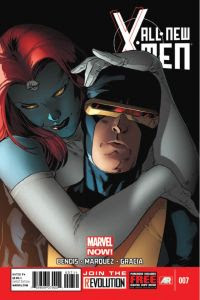 This book is turning into a bit of a tease. The last two issues have contained little more than some teenage moping and a lot of angst. Now, obviously this is quite appropriate for an X-Men book but when the showdown between past and present Cyclops is so tantalizing, every moment that passes is excruciating.

This week more character work is laid down as Mystique meets past-Cyclops and pushes him to confront his future self. As always, Mystique has something up her sleeve. Or her arm length gloves. It was interesting to be reminded that at this point in the game past-Cyclops wouldn't know who Mystique is. You forgot sometimes how old these characters are in their universe.

Bonus points go to whoever gave past-Hank an iPad. That was a fun image. 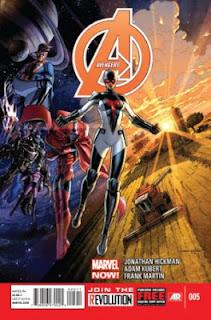 Another issue to ingratiate us with the expanded roster. This week we meet Smasher. Not a lot to say about the issue really, other than there is a cool reveal of who her grandfather is.

A good issue but nothing to be blown away by yet.

Things have kinda slowed down to a halt.


At this point I'm just trying to fill space for the next review.

How are you? Hope you're having a good Thursday. 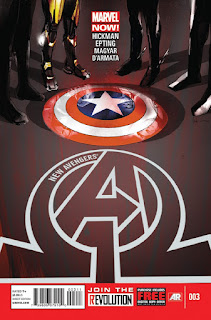 This issue sees things get even more bleak. This is a dark story, in a lot of ways. The group have come to the conclusion that to stop the problem of another Earth from a different dimension crashing into this one they have to destroy the incoming world.

It's obviously a decision of great magnitude as they have to essentially kill another Earth.

This group is made up of the Illuminati members (barring the dead Charles Xavier) but it also includes Captain America, a man of a very high moral fibre and one who is not used to making hard decisions in secret like the Illuminati are. It makes a great conflict but also a roadblock for the group's plans.