What Were You Doing New Year's Eve?

I was spending it with this bunch of crazies. 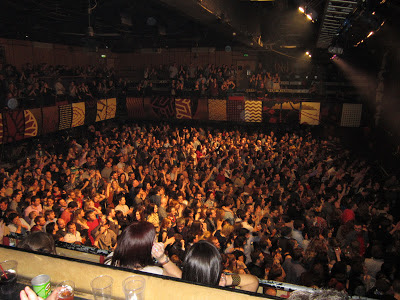 For the past decade or so, I've tried to spend New Year's Eve at a concert. It's less crowded than most pubs or clubs (yes, even considering that picture I took), you have guaranteed good entertainment, and it beats staying at home.

And more! Seriously, it was ridiculous.


Here is, if memory serves me right, the first song they did after midnight. Throughout the night they were taking turns on stage but this had them go all LiveAid together at once. Thanks to jenfus for the video.

By the way, I want Jerry Fish to play at my funeral. Not a song playing on CD, I want the guy to play live, drunk, and preferably an old punk rock tune that ends up going for about 15 minutes. Seriously. You had to be there. It was a religious experience.
at 15:22