A Bluffer's Guide To The Irish Squad At Euro 2012

With only a week to go before the tournament kicks off, I thought I would give a quick run down of some of Ireland's most important players and talking points going into it.
﻿
﻿

Our lads have already left the country to warm up before Poland and with more and more people getting interested in the big event, this guide will hopefully be able to give even the most clueless foreigner enough info to bluff your way through watching the tournament and shout at the screen. Sure, it's all just a bit of craic.

Here are our most important players in the tournament.

Shay has been ever present as our number 1 goalkeeper for at least a decade now. In fact, he's been so ever present that people have complained about him. That's right, critics claimed that he shouldn't have been playing so much because we need to give young guys a chance in friendlies. Take a break? That's not Shay's style. He'll kill your grandmother to make sure he plays for Ireland. That's my kind of footballer.

Outside of his passion, he's also one of the few players we have who is genuinely world class. We'll be relying on him a lot but he rarely disappoints, which is amazing as he has played for Ireland more than any other player, ever.

He recently became known as The Iron Curtain after he basically fought a war against the Russians in the qualifying campaign. Our best defender by a country mile and a straight talking leader to boot.

He was an injury worry after he broke his collar bone earlier in the year but played in the last friendly and seems to be hiding the pain if he's experiencing any.

Another player we'll be relying on as we play teams who are better than us and his ability becomes vital. Like Given, if he's not on the pitch, we're in trouble.

Similar to Dunne in his veteran status and also working through an injury going into the tournament. Hopefully he'll be fit by the time we kick off against Croatia although at this point I worry he won't be 100%.

John has the advantage of being able to cover pretty much any position in defence and can even play central midfield if necessary. Although Trappatoni is unlikely to experiment with such things it's still handy to have the cover.

One of the many players in our squad who are at the tail end of their career. He'll be hoping to put in a good performance for what might be his last tournament chance.

Legend surrounds our Duffer. The biggest urban myth was that he would sleep at least 14 hours a day. This, it was said, is why he had so much energy on the pitch. It's amazing the shit we'll come up with in the pub, isn't it?

He's an older man now so he might not have as much pace as he once did, but he's still our biggest creative force on the pitch. Able to play on either wing, you'll never know where he'll pop up.

He can score just as much as he can set-up his team-mates. He famously scored in our last tournament appearance too so hopefully he can do the same this time around.

Aiden is a controversial figure in the Irish team and not because he's Scottish. Equal parts sublime and frustrating he's an inconsistent player who on his day can change a match or be invisible.

I like to refer to him as the Jack Russell of the team. Not because he's some kind of terrier but because he can often mimic a little dog running around a football in the park. He has the thing but doesn't always know what to do with it.

But still, he was our biggest contributor of assists during qualifications and currently has a point to prove. He could be a dynamo if he puts his head down in training (and looks up on the pitch). 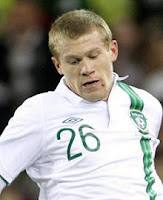 James is another lad who has courted headlines but for better reasons. Mostly.

James played for the Northern Ireland under 21 team but then made it very clear that he wanted to play for the Republic. He would get abuse on twitter for this switch of allegiance but he took it in his stride and would give just as much abuse back.

One year ago, he was playing for a small club in the Irish league but after a move to Sunderland in the English premiership he broke into their first team and has been a sensation ever since. This lead to the world and their mother demanding he get played for us.

Trappatoni would resist (he fears change) but even he has given in to the Derry man's charms.

When he got substituted into his first game for us earlier this year, the stadium gave him a standing ovation as he came onto the pitch. Such a crowd reaction even prompted Trap himself to ask if it was Pele he was bringing on. I was at that match and it was beautiful to see. A supporter for the other team (Czech Republic) was sitting beside me in the stadium and asked me "Is he a big player? Why is everyone screaming so much?", I answered "He's making his debut. We're welcoming him to the team". "Wow, really? That's... that's really nice". Yeah, it was.

He's not guaranteed to play every game, but as you can tell by how much I'm writing about him, he's someone we'll all be hoping to see play. Not least because he's bloody good too.

See that face? That "O" face he's making? That's Robbie's goal face. He makes it a lot. He has scored more goals for the Republic of Ireland than any other player in history. He's also our captain.

The Dublin born man is playing in America now for L.A. Galaxy which in the eyes of the football world is a step-down. Sorry folks. This is leading to a few people to fear that he might not be what he once was. A couple goals and we'll shut up.

Attack is probably where we have the most options in our squad but Robbie is still our number 1 man so no matter who plays beside him, we'll be looking to him for the goals.

Il Trap. The Boss. The Daddy.

I fucking love this man. One of the greatest managers in football history. There are less then a handful of men who have won as many trophies as our Italian overlord. He is also the only manager to have won all UEFA club competitions. Ever. But even with his success, he still has his critics in Ireland.

Trap has a firm belief in defence first. If you don't concede a goal, they can't beat you. This has led to us getting some great results and the second lowest goals conceded in the tournament but it has not brought attractive football to watch. He doesn't care though and his strict regiment yields results but requires consistency with a lack of experimentation ...and the football pundits hate him for it.

My personal opinion? We've qualified for a tournament for the first time in ten years. The last time our country had a sustained period of success was the early 90s. Our manager then was Jack Charlton (now seen as a god) and he had the exact same idea. So trust me when I say I'm not going to complain.
at 10:51