Some Nostalgia To Get Us In The Mood

Ireland play the Czech Republic tomorrow night in Dublin. I will be in attendance and will mostly likely post some pictures and a response before the week closes out. Seeing the boys play will no doubt only increase my excitement for the tournament this June so I feel it's appropriate that while I do so much looking forward we should also do a bit of looking back.

One of Ireland's greatest achievements was reaching the quarter finals of the World Cup in Italy all the way back in 1990. 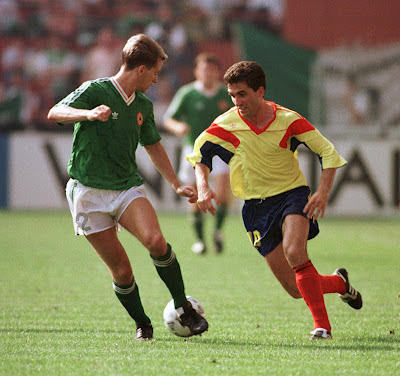 Now, to get to the quarter final, we first had to get past Romania. I was 6 years old at the time yet this match is still a vivid memory mostly due to the fact that it went to penalties. And penalties are the tensest, most nerve wracking thing a football fan can live through. My 6 year old brain was fried.

You can see the full penalty shoot-out here. It's about 20 minutes long and is followed up by a short interview with the great Jack Charlton (our manager at the time). Watching it in full will give you an idea of the tension I'm talking about but if you're short on time you can see a highlight video below.

Now, if you want an idea of how gripped in World Cup fever the country was at this time, the following is a great video taken directly after this match. The location is Walkinstown, Dublin and isn't by a sports club or anything. it's just outside a couple of pubs in a Dublin suburb.

Check out the Occupy-The-Roundabout movement we had. I love every second of this.