Last month on Twitter, I put out the idea of a fun writing experiment. There have been some very cool hashtags allowing artists to either work together on a piece or work separately on the same piece and then coming together to show how their different styles can make the same thing look very different. Check out the hashtag #coloristjam for some great examples of this concept.

I wanted to do the same sort of thing but for writers. To pick a simple premise, in this case I chose the nursery rhyme Humpty Dumpty, and to write a two page short story based around it. You could go as wild in different directions as you like as long as you could still tell that you took some elements from the original rhyme. So, the #writerjam tag was born.

For those who are unsure, here is the actual nursery rhyme:

Pretty simple right? I hoped that having such a simple starting point would allow you to show your own imagination as a writer and also the different styles of writing out there. Sometimes I feel like it's not easy in comics to show exactly what the writer contributes as it is such a collaborative medium. I like showing raw scripts (although, I think I'm in the minority there) because I like to demystify the process as much as I can.
To start off, here is my version. Maybe I've been watching too many Aaron Sorkin movies lately or maybe I just saw too many puns to exploit but I went for a political drama...

PAGE 1 - 5 Panels
Panel 1
INT. NIGHT - HUMPTY'S LIVING ROOM
We see a couch armrest in the foreground to the side of the panel, in the background a large television shows the news. The room is dark and is only lit by the television's glow. On TV the news anchor is giving their update.

ANCHOR:    Senator Humphrey Dumpty in hot water tonight as a controversial document is leaked indicating his involvement in the illegal treatment of immigrants at our border.

Panel 2
Same scene but now a hand has entered the panel, holding a glass of whiskey and leaning over the armrest. Someone is watching this news and isn't taking it well.

Panel 3
We now see the whiskey drinking viewer as our panel is directed towards the couch from the point of view of the television. It's the same man pictured in the news report, Senator Dumpty. He is a man with a dour disposition. In an expensive shirt and loosened tie, he watches grimly. His mobile phone rings on the couch beside him.
ANCHOR:    The border wall, the centre piece of the popular Senator's campaign promises, has seen its support from Texan citizens drop severely in recent months.
SFX:               Bvvd Bvvd Bvvd

Panel 4
The man has stepped up and answer's his phone. He's walking to his apartment windows. It's an expensive place. Penthouse. Floor to ceiling windows show an impressive night-time view of the city's skyline.

DUMPTY:    Yeah... I saw... I'm on my way.
Panel 5
Close up of Humphrey staring out, his face reflecting in the window's glass. The reflection makes it appear like he's taking a long hard look at himself.

PAGE 2 - 6 Panels
Panel 1
EXT. NIGHT - TEXAS CAPITOL BUILDING
Exiting a car, Dumpty is barely visible over reporters and photographers. He holds his hand up to try and shield his face from the cameras. We could have a cacophony of voices asking him questions but I prefer the idea it's the photo we'd see in the paper the next day.
CAPTION:    "It's over..."
Panel 2
EXT. NIGHT - CAPITOL BUILDING MEETING ROOM
Dumpty is sat at a large boardroom style table with 5 other people, similarly dressed in expensive suits and attire. One man, the speaker from the last panel, addresses Dumpty with casual authority. He's a shadowy figure. A mystery man, pulling all the strings
MAN:            ... we can't fix your mess, Humphrey.
DUMPTY:    I'm up for re-election at the end of the year. You know that even with minimal support from the party I can win my seat back.
MAN:           We've decided to back a different horse in that race.
Panel 3
The man looks to a younger gentleman standing at the back of the room, leaning against the wall. This is Charles King. The new hotshot member of the party. Humphrey is enraged at the implication.
DUMPTY:    What? You mean King? You really think they'll elect Charles King over me?!
Panel 4
Close up of the authoritative man's face. He sinisterly leans forward and smiles.
MAN:            Yes.
Panel 5
The people start to file out of the room. Charles King casually takes a parting shot at Dumpty, buttoning his suit jacket.
KING:           Oh how the mighty have fallen...
Panel 6
Dumpty, now left alone in the room, sits with his head in his hands contemplating his fate.

Now, here is Hugh Madden's script (remember him from last week?). He wrote a very funny parody of 90s  superhero comics and edgy, grim-dark scripts. However, despite the contrasting tongue-in-cheek story you may notice some similar themes...

A Nursery Rhyme… FOR ADULTS!!

Panel 2:
At the foot of the wall, looking up are a trio of refugees. They are shabbily dressed, wearing rags and carrying babies. This is very real.

Panel 3:
On top of the wall, sits a shadowy figure enveloped by a sandstorm, which is very gritty.
- “Quick! There’s no time”

Panel 4:
We focus in on Humpty Dumpty (HD to his friends… not that he has any!) He is wearing a leather duster, a cowboy hat and a pair of wrap around shades. In his duster pocket is a bottle of scotch. In his holster a revolver. He is the kinda guy who says “I don’t make love, I fuck”
-”If you wanna make it to freedom, you gotta trust me!”

Panel 5:
A refugee steps forward. She is different from the rest. She is hot. Her rags are just short enough and just long enough. You know what I mean. Wink Wink. She reaches her hand out to HD

Panel 6:
He hauls her up beside him on the wall. She stares longingly into his eyes.

Panel 7:
Close up on their faces. She’s obviously smitten. Who wouldn’t be?! He’s just so cool and real.
HD - “Tell your “Amigos” to get over the wall. We’re running outta tim-”


Page 2:
Panel 1:
On the other side of the wall stand a troop of ICE agents. They are uniformly fat, almost spherical, red faced and squeezed into mismatched uniforms. They carry an assortment of weapons.
Agent: Come down from there. And don’t do any cool shooting stuff.

Panel 2:
H.D looks down on them with contempt. He has seen too much of this shit. The hot girl is trembling at him.
HD - “Not in this life time!”

Panel 3:
HD jumps off the wall firing his gun.

Panel 4:
The ICE agents get shot. It’s all blood and gore. So raw!

Panel 7:
HD looks down and sees he has been shot by a stray bullet. His shell has cracked. His yolk is spilling out. Its gritty and real!

Panel 8:
HD slumps over by the wall. He knows that he is a goner but he is too cool to complain. He is hard core. The hot girl kneels beside him. She starts to cry because girls do that.
HD - “Go! Go with your family! Leave me”

Panel 9:
Hot girl leaves looking back at HD in that way that allows you to see her breasts and her buttcheeks at the same time. She’s sad because she knows that she will never find a lover as manly as me HD

Panel 10:
The refugees disappear into the desert. Into America. Into Freedom.

Panel 11:
HD rests against the wall, smoking cigarettes because he doesn’t give a shit anymore and he looks cool doing it. His yolks have spilled out. No one is going to put him back together again. He was always broken anyway… but on the inside!!!!!

As you can see, without meaning to, we both ended up doing American border wall themed stories but from very different styles. Also, you can see the varying type of comic script formats out there. That's one thing I hear a lot of people starting-out ask about; format. I think, as long as you make your panels and page counts clear, along with dialogue and other important information to give to your art team, there are very few wrong ways to do it.

If you're an artist, like Lúc O'Cofaigh you can even jump past the script stage and just sketch out your idea. He clearly had a lot of fun with this one so I'll leave you on his sci-fi odyssey! 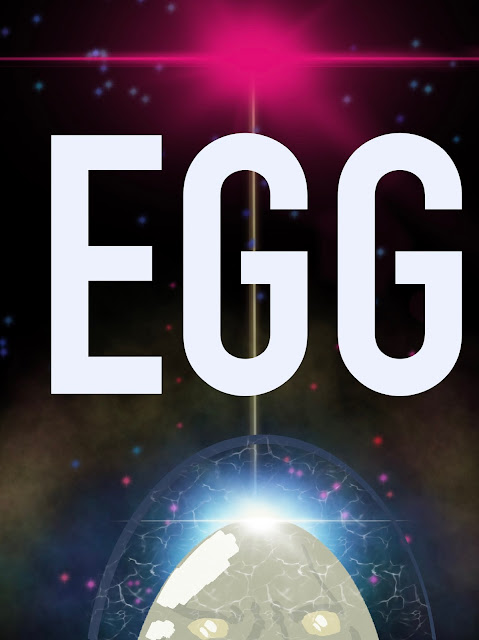 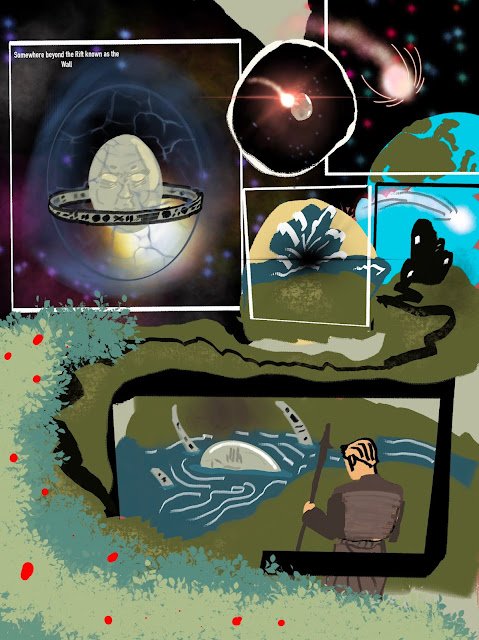 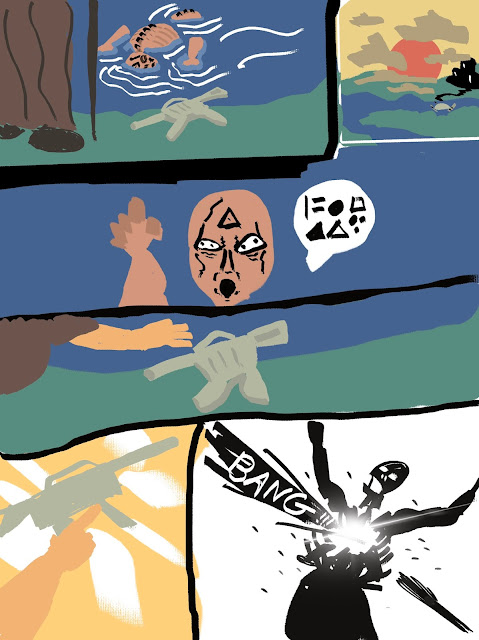 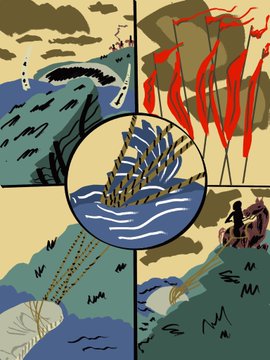 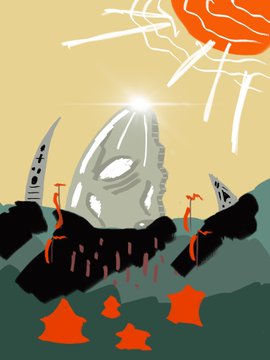 Let me know if you have a go at this yourself. Would love to see everyone's version. Have some craic with it!