For those who don't know, SAGA is the wildly successful comic written by Brian K. Vaughan, drawn and coloured by Fiona Staples, and lettered by Fonographiks. Very briefly I'll try to explain the premise because if you haven't read the comic already, these thoughts are not for you anyway since I'm going to be talking about a comic 54 issues deep and it'll be littered with spoilers. 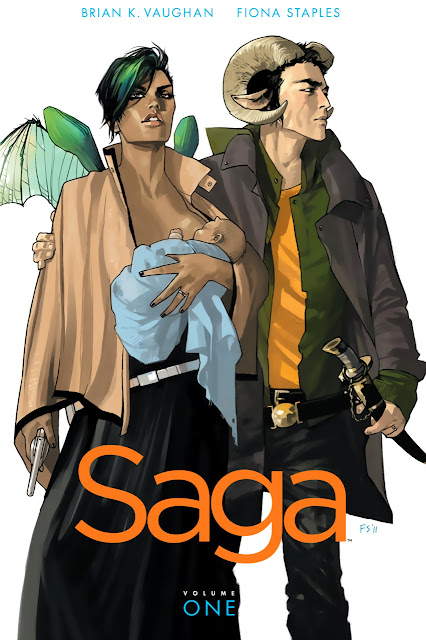 Marko and Alanna are soldiers on opposite sides of an intergalactic war that has been raging for generations. They meet in prison. Alanna the guard, Marko the prisoner. They fall in love, or more accurately they fuck - she gets pregnant - and they try to make it work, but love definitely follows. As does their child, Hazel. They go on the run to keep their family safe from a universe who would keep their love a secret. Many people die along the way.

From the beginning of this story, these adventures have been narrated by Hazel (or at least, that's how it seems, there is space for there to be a twist in that down the road) and because that narration has been lettered in very... childlike handwriting, I've always assumed she is no older than a teenager when writing this story. Which would give us a pretty decent idea of what age she will be at the end of the story, one could assume. Considering she's now around the 9 or 10 mark in age, and that the series has jumped forward in time on a number of occasions, you'd think at this point in the story we'd be coming to the end. Right? 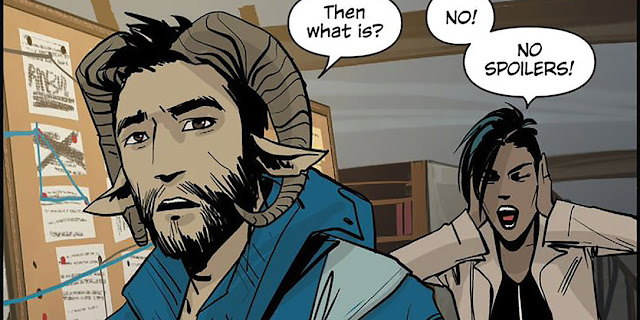 While the most recent issues had a bit of a quicker movement in pace and story (SAGA has, on a few occasions now, slowed down to glacier levels of meandering) it still seems no closer to finding a conclusion to its story than it was at the end of its first arc, fifty issues ago. Which is not necessarily a mark against it, THE WALKING DEAD has never shown signs of wrapping up and that's ok but SAGA always felt like it had an ending available. Even in issue #51, Hazel via narration talks once more about "conclusions". The idea of "happy endings" or unhappy ones have often been themes within the book. In the back matter of #54 Vaughan talks about taking a publishing hiatus with SAGA but then mentions that they plan to publish issues for many years to come. Many? Really? They're not beating a dead horse yet but the horse is starting to look bruised.

Why do I say this? Listen, I know any criticism for this perennially award winning book seems a bit rich coming from me but there is a common problem I'm finding with comic books these days that I'm reading and it's a lack of timely endings. There are a number of high profile, and genuinely great, creator owned comics out there on the shelves lately that are starting to feel like they're teetering on jumping the shark before they get to their much touted finish line, I'm looking at you WicDiv. Like I said, SAGA has kept my interest for these 54 issues but I don't know if I have another 54 in me.

Here are my reasons why:

1) The cast and scope is relatively small, and dwindling.
Like I said before, spoilers, but with Marko now dead along with Doff and Sir Robot, while other characters like Gwendolyn, Sophie, and Lying Cat all seemingly sidelined it's getting harder to find a b-plot anywhere in here. With the majority of the characters all together in this gang on the run, it can also create an almost myopic focus on the group's story, with very little space to breath in terms of development. There have been times when I've missed the days of The Will's escapades giving us a moment away from the family. Now they're literally all together. So with that in mind, yeah, sure, they're on the run, lets move the plot along now. What's next?

2) I don't really expect there to be a happy ending.
Hazel says in her narration that she doesn't "grow up to be some great war hero or any sort of all-important saviour". Ok, I can get down with that. But with the way the story is written since the beginning, I also know it's probably gonna end up with a lot of dead characters. So knowing that I'm investing in this unconventional family of misfits, and knowing that they're probably all going to die, it's getting harder to go along with this deal. I didn't really sign up for a depressing horror show. I can't watch Ghüs die. I just can't. 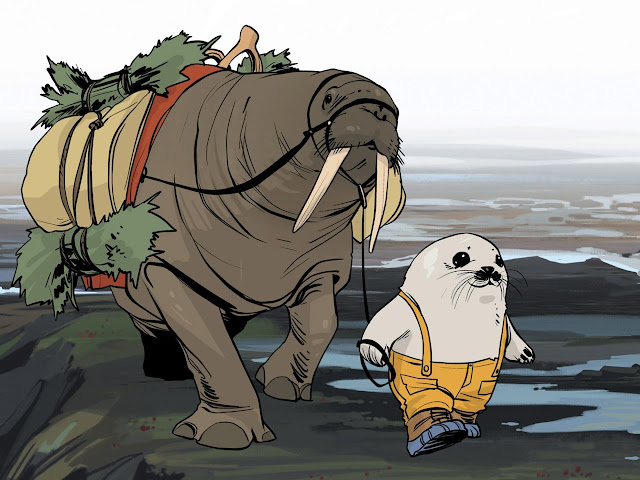 3) There is a level of self importance that is starting to grate on me.
The life lessons that are being taught through the convergence of Hazel's narration and the story unfolding are nice but after 54 issues of them it's getting a little... preachy? Or at the least, I've probably just seen the technique used too many times within the comic at this point. Of course, I'm willing to admit that this opinion comes with a huge caveat: I've been reading this comic in monthly issues for 6 and a half years now. In its collected format, it probably doesn't seem nearly as cloying. But now, at the prospect of reading this for a decade starts to appear on the horizon, I kinda need that device to be shaken up. It's like when you have a friend who becomes a parent and constantly tells you that you don't understand how amazing and difficult and life affirming parenting is. Sure, I get it, but I don't want to hear it all the time? It's annoying. Saga is becoming that friend.

4) Writing is great, I know.
Brian K. Vaughan has made writing a integral part of this story. Maybe it's just because I'm a writer myself, but it's almost becoming comical how much the story is starting to revolve around it. The couple fall in love over a romance novel and imply there are several layers of meaning to it. They track the writer down and hold him in esteem of mythic proportions. Marko recently decides to become a writer and waffles about the virtues of writing and how it can change the world. If Hazel's hand written narration doesn't end up being a book she is writing herself, I'll eat my hat.
I don't know, like, I know we writers are megalomaniacs but I guess I still find it funny when I'm reminded of that fact.

I could talk for hours about how amazing this book is, with beautiful artwork from Fiona Staples (who I know can be like Marmite for some readers and while I agree her digital painting can sometimes make the characters look like they're standing in front of a green screen she is an amazing character designer and incredibly expressive) and seamless lettering from Fonographiks but thats the review I would have written 20 odd issues ago. Now I have questions and concerns. Is the book going to keep my interest for the "years to come" and what is the direction of the book at this point? SAGA has been a juggernaut in sales and critical acclaim and I get that a juggernaut can't be stopped but it doesn't mean that it shouldn't be.
at 20:47