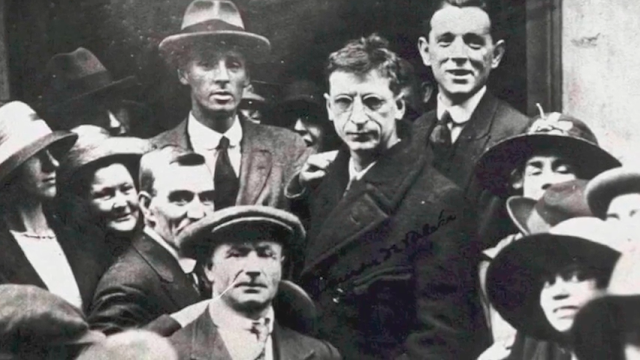 My great granddad fought in the Irish Easter Rising of 1916 with his brothers, both metaphorical and literal. This past weekend there were a lot of commemorations about that rebellion. I heard little or nothing mentioning him or his brothers. I had known a few scraps of information, little bits told to me by my dad and then paragraphs here and there mentioning him in history books dedicated to the subject.

He was apparently a popular man within the Irish Citizen Army, someone who kept moral high with our family's common trait of telling tall tales. He was also a man with a short temper, and there was a story about him nearly killing a young Irish soldier because his slightly skewed salute made Vincent think he was a British spy. Everything I heard about him made me think "yup, he's a Poole, alright".

I think my knowledge of him tripled or more tonight when I received a link from my mother to this documentary chronicling Vincent and his brothers' contributions to The Rising. I have to say, I got a little overwhelmed with pride after watching it. The documentary spends approximately 25 minutes reciting recorded eye-witness accounts of his movements both during and after the fighting. It's nice that at the end of this video I still was able to think "yup, he's a Poole, alright".

Here it is, if you're interested. Vincent's story kicks in at the 25 minute mark.


I'll end on this wonderful quote from Irish journalist and novelist Gene Kerrigan:


"Some of us have been around too long to have heroes, but if I had a hero in these matters it would be an obstreperous little man name Vincent Poole"