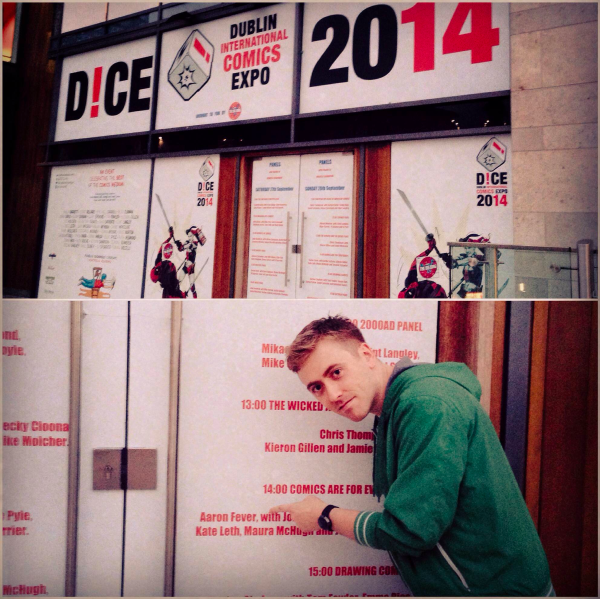 I was lucky enough to be involved with the Dublin International Comic Expo this year. It was my first time working at an Irish convention, which is weird. I was very excited to experience doing panels and then actually going home to my own bed. It was a novelty I could really get used to!

Considering I've been on over 50 panels at conventions, the two I moderated at D.I.C.E. were the first I ever did about comics. This little tidbit made me a little worried about how they would go, just because it was a new thing, but I couldn't be happier with how they turned out.

The Writing Comics panel on Saturday was a lot of fun and I was super smug when Gerry Duggan commented afterwards that he thought it was a great panel for anyone who really had an interest in writing comics. That made my day.

The big highlight of the weekend, however, was the Comics Are For Everybody panel. I got to talk about diversity in comic books with Jamie McKelvie, Kieron Gillen, Maura McHugh, Jordie Bellaire (founder of the Comics Are For Everybody initiative), Kate Leth, Jeanine Schaefer, and Declan Shalvey. The photo below is of that powerhouse group just before Jamie joined us. It was a really motivating and energising talk and we've had nothing but amazing comments and reactions for it since. I'm really proud I got to moderate that talk as it's something I'm pretty passionate about so I couldn't be prouder that it seemed to go so well.

I just have to thank all the guys at Big Bang Comics in Dundrum who organised the whole convention, Declan and Jordie for making sure I could be apart of it all, the wonderful volunteers who kept everything ticking with a smile on their faces, and the fantastic folks who attended the show who were all polite, engaged, smart, and just generally awesome.
at 00:40