2013 was my year of reviewing every single comic I bought and while I enjoyed the experience it was extremely time consuming. This year I'm hoping to get a lot of projects done but most of them will be offline and I'll let you know about them as we go along. So what happens to my comic articles? They will be a little more general from here on in. I'll still talk about what I'm reading and lots of general thoughts but the format will be a little looser. For example this week I want to talk about a comic I was introduced to called Black Science. 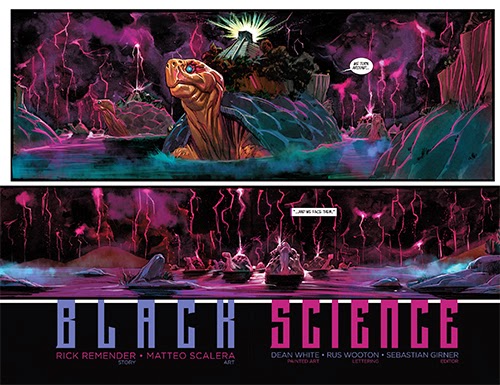 So far there has only been two issues of this stunningly beautiful book. It's written by Rick Remender who most people will know from his acclaimed Uncanny X-Force run. The art credits are where I get a little bit confused. Usually you see an "Art" or "Penciller" credit next to a "Colours" credit. Here it says Art by Matteo Scalera and Painted Art by Dean White. As you can see, the colours are amazing in this but I'm not sure all of it is necessarily painted and concordantly I'm not sure all the figures are drawn by Matteo Scalera. So where does one man's work end and the other's begin? I recently asked a pro this very question and I honestly was more confused afterwards than I was before I asked so your guess is as good as mine. I suppose it doesn't really matter though because when the end result is this pretty, who cares? 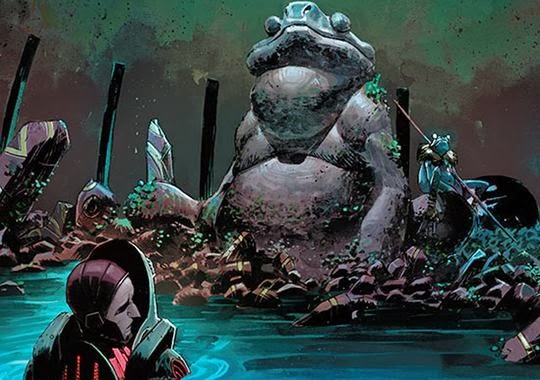 The story will remind a lot of sci-fi aficionados of the 90s TV show Sliders. A group of people are sent through different parallel dimensions at random due to a science experiment that has gone wrong. Unlike that TV show, however, the worlds here are much more exotic. The first one we see is ruled by giant frogs and fish. The second is an unusual mash-up of World War I and futuristic Native Americans. This alone would be a fun read that is completely in the wheel-house of my interests but added to that the complicated and broken personalities of the characters, well, I'm completely hooked. 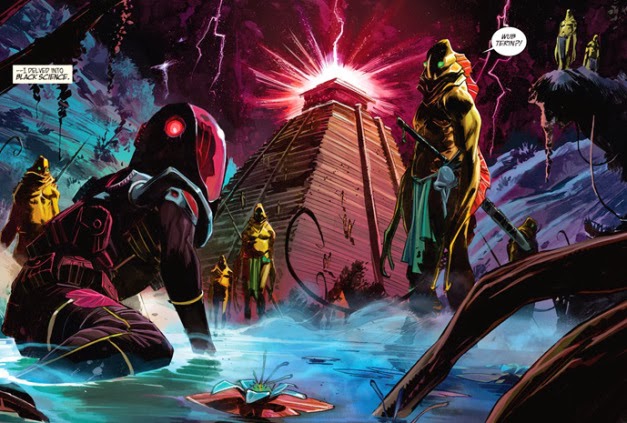 You're dropped in the deep end from the very start. Within the first 6 pages we see a character's death and before the end of the issue we've seen torture, a beheading, and fish nipples. This is exhilarating to read but also slightly overwhelming as there was an important plot point that I didn't really pick up on until my second reading of the first issue. Whether I blame this on my own lack of concentration or on the writer's lack of clarity is a tough call but for now I'll give the benefit of the doubt to the writer as it wouldn't be the first time that my IQ has been less than stellar (you read this site, I'm sure you'll attest to that).

It's early days but I would highly recommend Black Science to pretty much anybody who reads comics in general. Its fun, mysterious, exciting, and just straight up gorgeous. I don't know how far ahead Remender has planned but there is definitely the scope for this to run for years. Get in on the ground-floor now so you can eventually be smug about how you were reading before the movie/TV show/Netflix series.
at 13:46