Once again I try to give you My Favourite Things from around the web in the last month.


Tom Hiddleston is in danger of becoming a regular feature in this column. He has appeared far too often at this point with his exploits. He is clearly having far too much fun.

Recently he featured in some short clips on Comedy Central to promote Thor: The Dark World. Watch with glee as he tries to get the upper-hand over a bunch of small kids.


The Make-A-Wish Foundation is wonderful and provides real service to millions of young children who are fighting for their lives against server and often terminal illnesses. This particular wish got a lot of attention online last month and for good reasons.

Young Miles is only 5 years old and has been battling leukaemia since he was 20 months old. When he asked if he could be Batman for a day, the response was strong and heartwarming.


I genuinely believe Gravity will be looked back on as being similarly cinematically influential as 2001: A Space Odyssey. I got to see it in November and was really blown away.

Do you remember when Sandra Bullock is trying to communicate with Earth but only gets a strange man, his dog, and a baby? Well, there is a short film of his end of the conversation. It's made by Gravity director Alfonso Cuaron's son Jonas.


We here at FRED love both Doctor Who and Sylvester McCoy with all out hearts. Just to prove a point, here is me with Mr. McCoy from a couple years ago: 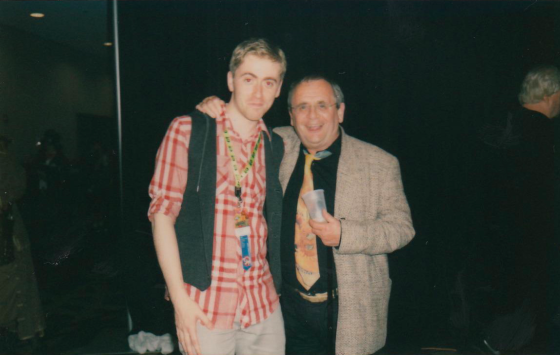 Any excuse to show people that...

Anyway, with the big 50th anniversary this past month, Mr McCoy and some of his fellow Doctor cohorts decided to do their own big reunion show. It's written/directed by Peter Davison himself and features pretty much everyone you can think of from the Doctor Who universe.