I... uh... I'm a little lost for words. After months of buying 4 or 5 comics each Wednesday I'm a little stumped to find that there are no comics out this week that I follow. Lets not forget that I follow at least 10 different series at the moment. This is a little bit weird.

So to give me something to write about I decided to pick up a new #1 out this week that I wasn't sure about buying. That's how much I love you guys. So lets check it out, shall we? 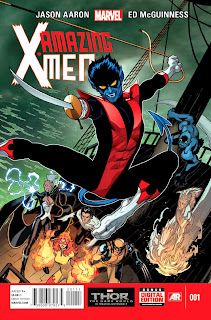 So there are a couple reasons why I was originally on the fence about getting this. Here is my pros and cons lists:

Cons:
- I'm not convinced by Jason Aaron's writing. I think he can be sloppy and his dialogue can really be wrong for certain characters. To me it often reads like he writes everyone as if they're Spider-Man.
- I'm not sold on Ed McGuinness either. For much the same reasons, his style doesn't click with me.
- I'm already buying two X-books, do I really need another?

Admittedly, these are mostly just points of personal taste (and a third point about personal dignity). But in comics, taste is everything.

Pros:
- It's got the return of Nightcrawler.
- It's got Iceman in it.
- It's got Firestar in it (for the first time in an X-Men book too).

I'm kinda a sucker for some characters, you know?

But, taking this into account, how does it read? It's not bad. There is an interesting premise to Nightcrawler's return. The dialogue does get on my nerves on a couple of occasions though. Some people really talk out of character. There is a back-and-forth between Storm and Wolverine in the first couple pages that I really hope I'm misinterpreting because it's kinda shameful.

It says at the start that it's "1 of 5" but as this is being billed as an ongoing series I assume it just means that Nightcrawler's story will be a 5 issue arc. If so, I may just give those 5 issues a chance.
at 18:16