I'm back once again as I keep to my promise of writing about every single comic I read in 2013. As always I list them here in the order that I read them so take from that what you will. 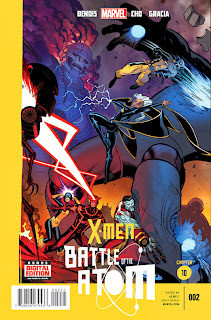 There are 4 artists attributed here but in reality I should be adding another 6 to that list at least. The credits on the inside of this issue are immense.

The story also reads like a cluster-fuck too. Most of the issue is the big climactic battle between all the X-Men (past, present, and future) and some SHIELD Sentinels. Once all the big action is over everything wraps up in a rather haphazard and forced way.

As the X-Men leave to once again go their separate ways, a few people change allegiances and it comes out of left-field to a large degree. I don't think they've shown the change-of-heart in the story sufficiently enough for it to make sense to the reader. Or at least, didn't give it enough time at the end here for it to seem natural. The couple pages dedicated to it at the end is not sufficient.

Now that Battle of the Atom is over, I think it was a lot of fun but ultimately pointless. 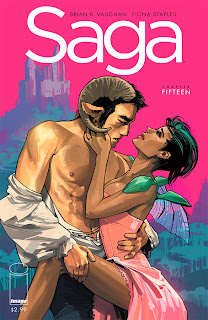 The family have taken a break from running for the time being. They're currently hiding out at the residence of the author who brought our two star-crossed lovers together. With the loss of Marko's father so recent, it's a vital break in action for everyone to come to terms with the situation.

Meanwhile, The Will gets more and more bad luck. It's weird to feel sorry for someone who is essentially tasked with tracking and killing our heroes but there is a big grey zone in Vaughan's characters. Everyone has their own motivations and rarely is anyone just plain evil. The Will is no exception and you can see that he struggles with doing the right thing. He's sympathetic and you find yourself rooting for him, to a point.

On a side note: I don't think I've ever read a comic that has had so much sex in it. 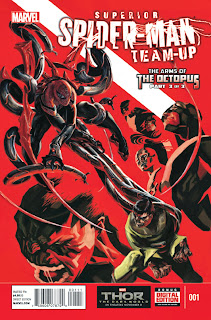 It's part 3 and the end of The Arms of The Octopus story. I enjoyed it immensely. It was a light story with very little at stake but it was told well and had some great artists who I hadn't seen before so I hope it was a success because I'd like to see more from everyone involved.

The original X-Men haphazardly fell into a fight with a fake Doctor Octopus and thus have been embroiled in a mystery with (ironically, the fake) Spider-Man to get to the bottom of it. Along the way they enlist the help of Bruce Banner and a shifty scientist called Doctor Jude.

It turns out Doctor Jude was at the bottom of it all and created lots of fake bad guys in order to hatch his evil plan of... you know, I can't even remember what his evil plan was. He was foiled in the end by our heroes so I guess it doesn't matter what his plan was anyway.

Like I said though, lots of fun to read. 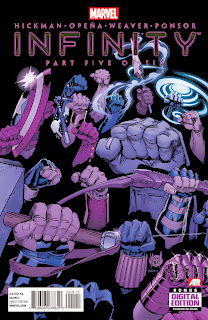 Out of the two big events that have been running side-by-side, if I had to pick a favourite it would be tough for me to make a decision.

Battle of the Atom was definitely more fun, but the story itself wasn't anything particularly special. It was exciting but lacked much depth.

On the other hand, Infinity was slow and moody but it definitely seems to be the more satisfying. It's true, we're not quite at the finish line yet but with only a couple issues to go I have to say that I've been impressed with how epic this space battle has felt.

The idea that Hickman was germinated from the beginning of his Avengers run, that Earth is an Avengers World, is coming to fruition and I really like it. Now that the Avengers have liberated other worlds and other races have turned the Avengers' "A" into a banner to unite behind... it's all very inspiring stuff.

And that's what you want from your superhero comics, to be inspired. 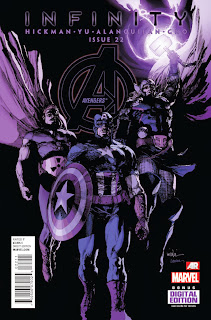 Its hard to see where this series is going to go once the Infinity story is over. It has been such a long engrossing story that it's going to be tough to pick up the pieces afterwards and move on. There is definitely going to be a lull for a couple issues at least. That's a challenge that I think Hickman is capable of tackling, I'm just fascinated to see what happens.

There are a lot of nice moments in this one. Cannonball and Smasher making out, Sunspot being a little jealous. Manifold struggling with the overwhelming madness of it all, looking for help while the two Captains are being pragmatic and a little nihilistic about the situation, and Thor offering some more fatalistic advice. There are plenty a great character moments to choose from on the eve of the battle for Earth.
at 19:10