After the relative graveyard of last week's releases, this week is much more vibrant. 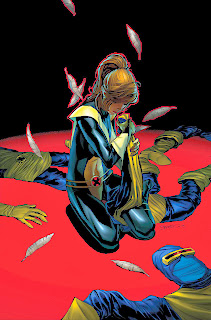 This is our first post-Battle of the Atom issue, so where are we now? Well, the past-X-team have left Wolverine's school and followed their mentor present-Kitty Pryde to present-Cyclops' school. I guess it's a bit like when you move to a new school because you're being bullied by the big kids at your old one and you try to pretend to your new classmates that you were actually considered quite cool in your old school. Except that you are also your own teachers. Time travel fucks everything up.

This was an immensely enjoyable issue. Lots of teenaged shenanigans that I giggled loudly at while reading. I even gave an "oooh" at one particularly fun hormonal event. Plus, I also get the impression that Bendis likes his Uncanny team members a lot more than Wolverine's cast of characters. You can feel his enthusiasm with every interaction. 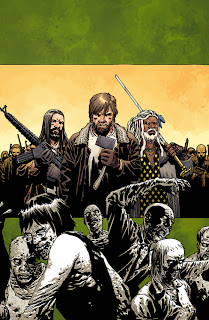 In some ways I hate reading this comic. The tension is so high with every page turn that it becomes unbearable. Painful, even. Kirkman has created a world so harsh, so vicious, that positivity is a rare bird even for it's reader.

When Negan arrived and committed such heinous acts of violence, you could be forgiven for thinking that he became just another obstacle to overcome. But what Negan really exemplifies is a bully and you never really overcome being bullied, you just deal with it. Rick Grimes is currently formulating a plan to deal with Negan and that's the scariest thing The Walking Dead can present you with; a Rick Grimes plan.

This will end horribly. It always does. 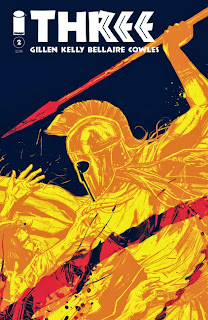 As a group of Spartans lay waste to a town of Helots, three of the slaves defend themselves and manage to kill a high ranking member of the Spartan government. News travels back and, as Bugs Bunny used to say "of course you realise this means war".

Kieron Gillen described this story as the opposite of Frank Miller's 300 and you can really feel that in this issue. Where Miller idolised the Spartans' raw masculinity, Gillen clearly reviles their hypocrisy and lifestyle.

There is another lovely written piece at the back of the issue. Gillen interviews history professor Stephen Hodkinson about this specific period of history and it's fascinating to learn about what is known and what is assumed as far as how Spartans are represented in different forms of entertainment. 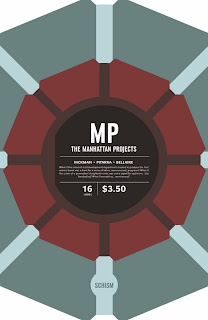 I have to admit, when the series was in it's infancy I didn't see this sort of story coming. In the beginning it was much more segmented. The characters all had their own arc and were mostly separate. Now they've really come together as a team.

Common enemies and desperate times tend to do that sort of thing.

I've spoken before about Jordie Bellaire's rockin' colours in Manhattan Projects but sometimes I worry that the printing process might not be doing them justice. There is an extended scene with Feynman and Einstein that features the red/blue style and depending on the page the reds can be very different. It's hard to tell if this is Jordie's doing or just a problem with the printing as these sort of mistakes are common even with modern printing techniques. I hope it's the former, she does too good a job for her work to get messed with like that.
at 14:03