I've been trying not to pick up any new comics, and by new I mean titles I'm not already reading. I'm already buying a lot and I'm trying to cut down. Yes, I'm talking about comics like they're cigarettes. However one was released this week that caught my eye and much like a junkie who is doomed for life, I had to get one more thrill. 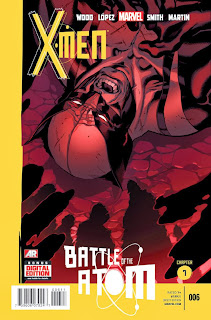 The future X-Men reveal themselves to be the slightly evil group that people suspected they were. Only slightly evil though. They genuinely seem like they only want to incapacitate the present X-Men and not kill them which I figure has to get you some sort of bonus points.

Out of all the different X-books I've read during the BotA event this felt a little more like business as usual for the title. We see more of Brian Wood's team than previously and that's a welcomed change because there are plenty of good things going on there.

One highlight is Shogo, Jubilee's adopted son. The young X-Men students devise a form of defense for the baby as... well, they're X-Men and it would be silly not to considering how often people try to kill them. When you see the result, it will definitely put a smile on your face. 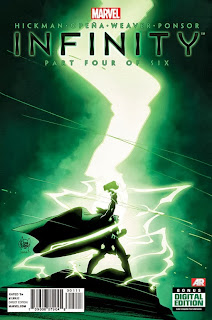 Our heroes have been beat down and demoralised on a regular basis in this story. For weeks now we've seen them lose, and lose, then win a little bit only to realise that they still lost. It's been a tough slog.

This issue starts no different with our heroes in space getting ready to surrender and Black Bolt on Earth destroying his home while getting battered by Thanos. Fun and games.

While Bolt's situation doesn't look like it will get better any time soon we are at least treated to a real stand-up-and-fist-pump-the-air moment at the end, which I won't spoil. I will at least share that it features everyone's favourite demi-god and our cover star.

Has the tide turned? 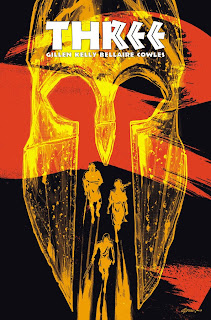 There is a rather honest and earnest letter from writer Kieron Gillen at the back of this issue. It's illuminating as it highlights his reasons for writing the comic and his process of researching for it. In a way, I think they probably should have put it at the front instead of the back as it cast the story in a different light for me.

Frank Miller's 300 is often mentioned as a comic book classic. It's indeed a very impressive comic but, as Gillen points out, it's not exactly accurate. Three seems to be Gillen's attempt to address that accuracy issue by showing another side of the coin.

For all the Spartans' impressiveness they still held slaves. This is the slaves' story. It follows three particular ones in a time after the battle featured in 300 takes place. While it's still a fictional story, Gillen points out in his letter that he tried to make it as close to life at the time as possible. This should be an interesting ride... 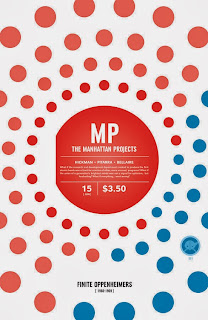 I'm a little sick of explaining how "this month, things get weirder" because I feel that this is a never ending ladder of weird and there might not actually be an end to it. So for the purposes of this blog let's just assume from here on in that everything in The Manhattan Projects is bat-shit insane.

This whole issue takes place within Oppenheimer's mind. The blue forces of his brother, who he has eaten (not a metaphor, he actually ate him), takes on the many fractured personalities of red for dominance. Dominance of what? I don't know. You could argue that this is Oppenheimer's conscience and that his more moral brother is representing that conscience fighting against the awful things that he is doing. You could also assume that this is more literal and his brother is still alive, as thought itself, and he's fighting to take over the body.

The fact that you can interpret it in all these different ways, each being fascinating, shows just how awesome this all is.
at 08:42