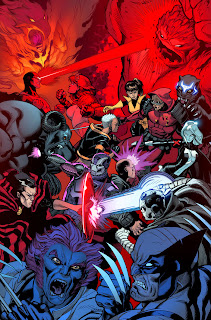 At the start of this issue, I feel like I missed a bit somewhere.

I've never been entirely convinced by Jason Aaron's writing but I'm reluctant to lay the blame on him. This is a complicated story (see all my attempts to explain it previously) so it's easy to lose track. However, up until now I didn't feel like I needed to work so hard to follow the loose strings.
This is the last of the cross-over Battle of the Atom issues. The next chapter will be BotA #2 and it will be the final part of the saga.

I've said before that as a stand-alone story, it has been great to read but I don't feel it was necessary for it to leave the trappings of the All New title. 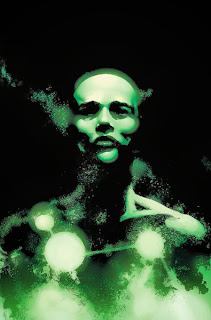 In comparison to it's sister title, New Avengers, this is relatively a drunken night out. NA is so morose and contemplative but this, this is a big dirty war in space. It's brilliant.

Good to see our two Captains, Marvel and America, working side by side as the Generals (ranks can be confusing) for Earth. Steve Rogers became Cap during a World War so he's right at home here. Although obviously, not actually at home, he's in space. 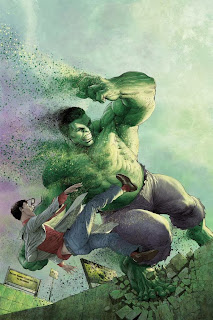 I've been really enjoying the Agent of T.I.M.E. storyline. It's fun (I use that word a lot in these reviews, but I won't apologize for it, as a little stuffed bull says "comics oughta be fun") but also it's building to a stage where it could also be a significant tale too.

Mark Waid put his stamp on the character from the very first issue of Indestructible when he made Bruce Banner accept his demon. He understands that he can't get rid of the Hulk so he needs to start using his time on better things and promptly gets to work. Unfortunately, as is often the case, despite Banner's best intentions Hulk will always get in the way and this time he literally (note the accurate use of that word) does because due to the current time-travelling shenanigans Hulk manages to block Banner from getting hit by the gamma bomb that makes him The Hulk.

It'll make more sense when you read it. Honest. 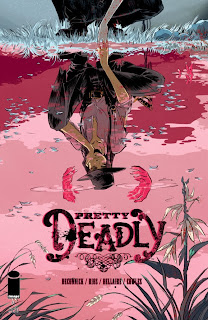 I'm quite surprised that DeConnick, having been in the comic industry for over ten years now, has written very few ongoing series. This is essentially her 4th. Considering how well respected she is in most comic book circles, that's a low number.

This is also the first of her work that I have read, so I don't really have a basis of comparison. I can't tell you that DeConnick is "in typically fine form" or anything like that because I don't know. What I do know, is that I'm interested to read more and that's a good place to start.

There are fairy-tale elements intertwined with wild-west ruggedness. Our cover star isn't seen until the very last page of the comic so be warned, this may not be what you expected from the previews. 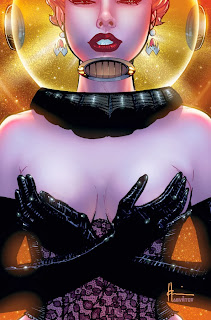 Ok, so here's the deal. I really like the story that Matt Fraction is writing here. It's layered, it's intriguing, I want to read it. But god damn it I don't think I can take Howard Chaykin's shoddy art anymore.

The art is cluttered, clunky, and often times incomprehensible. Would colouring fix a lot of those problems? Possibly. Colouring can often fix a lot of problems that artists create for themselves but it won't fix the faces that are all the same square-chinned-fat-headed same.

Howard Chaykin, you may be a legend of the business and you may be an absolutely lovely man but I loathe your style, sir. I think I may have to drop this book because of it. I'm sad about that. I really like the story.
at 17:36