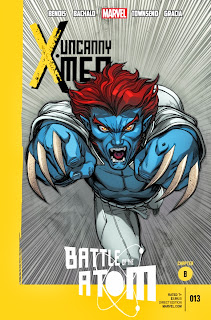 Only two more issues to go before the Battle of the Atom story is all wrapped up. It's even less when you consider that Bendis has revealed the final issue is essentially everyone's epilogues.
Considering the info, it's not surprising there are a lot of deaths in this installment. It's a bit of a bloodbath, really. Plus we're also told the rather game-changing info that the past-X-Men can't return to the past. At least, not in the same way that they came to the present. It looks like we're going to be reading more of their time-travelling exploits in the future. I, for one, welcome this news.

Although, the game was given away a little when Marvel released previews this past week of the team having adventures in space with the Guardians of the Galaxy. Sigh. Good job, marketing. 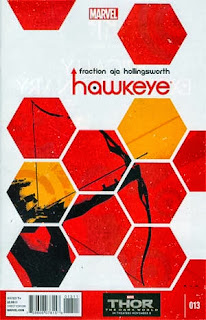 This month's Hawkguy wraps up what has been a labyrinthine puzzle of story structure. It makes sense that the cover mimics the jigsaw element. A chapter has ended now that we've filled in the blanks between the Pizza Dog issue, Barney's re-appearance, and Kate's leaving.

Where does that leave us? Kate and Pizza Dog are gone, although we'll be able to follow their exploits every second issue with the bad-ass Annie Wu climbing aboard on art duties(!). Clint essentially replaces her with his brother Barney. The tracksuit Draculas are still out to fuck up everyone's shit, bro.

So, not much has changed, really. C'mon Clint, get your shit together already! Or, never change, that would also be great to read. 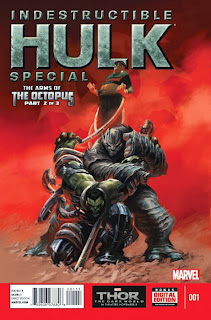 Stupid marketing problems aside, this is a fun story and well worth reading. I'm really enamoured with both the writing and the artwork.

There is a particularly memorable splash page in the middle of this where the original X-Men, Superior Spider-Man, Bruce Banner, and a random scientist do work in a lab and we see everyone at different stages at once. It's hard to explain, so give it a look and you'll know exactly what I'm talking about. Fantastic work. 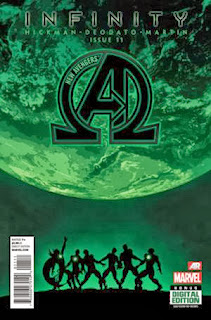 Ugh. I have to admit, I'm getting tired of this one.

I can take it from a comic with appropriately brooding characters but it needs to be balanced with some less mopey stuff too. This, however, is full-on impending doom and has been for about 11 issues now. It's getting close to the point that everyone dying might be a better outcome than reading on. 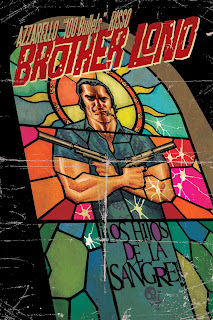 I really wonder how this reads to someone who hasn't read 100 Bullets in the past. Will they feel the same way I do? The little twist in the pit of my stomach every time Lono is threatened with (or threatening) violence. Every time he's pushed. Every time the situation becomes more unstable. Do they fear his (inevitable) relapse into murder as much as I do?

I hope so. It feels like that is the crux to which the story is pinned.

We're passed the half-way point now and it's all working to that point of no return. Once that first bullet is fired, it's going to be all-out war from there on in. And with Lono, those sort of things don't end well.

Or, at least, they don't end with a low body count. 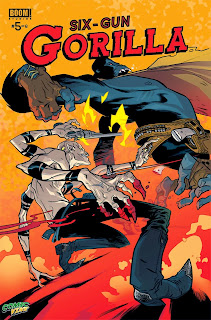 In the penultimate issue of 6GG (one of my stand-out surprises of the year) everything gets a little trippy as our hero, Blue, finally starts to figure out what he needs to do.

The planet, affectionately known as The Blister, has been guiding him more than he realised and helps him take this final step of understanding: He should die.

It's a pretty morose moral but Spurrier's writing helps you to take it with a spoon-full of optimistic sugar. Every story has an end, an ending in and of itself doesn't need to be sad. So, let his death have meaning.
I look forward to seeing that end next month.
at 19:58