It has been a manic week, I've just been able to get these comics read and this post written, so please forgive me if there are more spelling/grammar mistakes than usual. 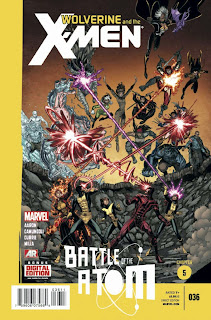 So far both Battle of the Atom and Infinity have stayed away from the shitty comic trope of killing off a character in a big event to create buzz. Both have had ample opporutnity to do it too, with so many characters involved it would be easy to give into the temptation to off one for the craic.

As a result I've enjoyed both, it has made it seem less like a "and nothing will ever be the same" pander-fest and more like "hey this is a really big story we want to tell you" fun-time which I'm totally cool with.

I mean, this issue has Jean Grey fighting Jean Grey and neither has died yet. That is sort of a miracle in and of itself. 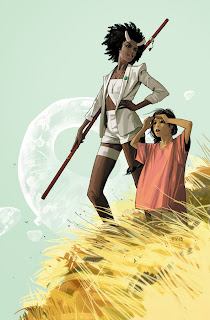 Look at how beautiful this cover is. Just look at it. Fiona Staples is fucking fierce.

Look at that natural figure on Gwendolyn. Yeah, she is standing like a sassy teapot but she's holding her staff like a pro. She's not dry humping it. Her boobs and cleavage aren't bursting out of her clothes. She looks real, even with the horns coming out of her forehead.

Not to mention the bold vibrant colours. I could star at the blue in the sky for days. Glorious. And the grass? Forgetaboutit!

Fiona Staples is absolutely killing it on this book. Give her all the awards. 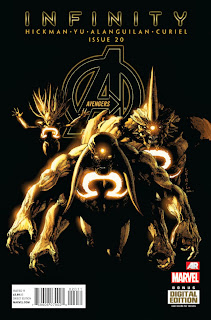 There are some characters that will always feel like throw-away additions. The Gardeners (who are the creatures on the cover here) definitely felt that way from the out-set. They were introduced to us in the first issue of Hickman's run and I figured would dissappear when he leaves the title.

The further we get into the story, however, I must admit that I would be sad if this was true. They're much more fascinating than I ever gave them credit for. Hickman has been slowly building their mythos up and I'd be surprised now if no other writer would be interested in expanding on it at some point in the future.

We're half-way through the Infinity story now and I'm really not sure how it's going to finish. I assume our heroes are going to win, obviously, that would be a real downer otherwise. 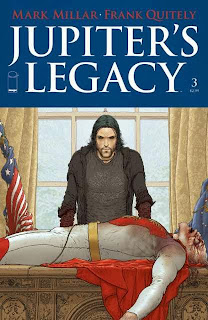 There is something quite heartless about this series. I suppose when your story is about betrayal that's probably the point. However with some logic problems within the story I've begun to question the writing and things tend not to go well when that happens.

In the very first page there is a glaring fault of logic. The Utopian makes a big deal about a young man using his superhero name in public. A BIG deal about it. He gives a whole speech about how they need to keep their indentities secret. Then, while still in public, says out loud that he's The Utopian... I'm sorry, what?

Later, and this isn't a spoiler as it's on the cover, when everyone turns against him it makes sense that a few heroes may have a problem with how he works but theres not a single hero on his side, nobody that agrees with him, not one person who isn't bitter about the guy and happy to see him dead... I'm sorry, Mark, but you haven't written a story where that is justified. Maybe if I keep reading you'll explain yourself but so far I'm not convinced.
at 17:48