Another jam-packed week. These big Marvel events are fun to read but they're tough on my wallet. 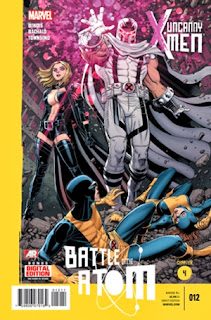 This is the 4th chapter in the Battle of the Atom event and the story is ticking along wonderfully at this point. It has almost become a "chase" story, past-Jean and past-Cyclops on the run from the future-X-Men and the present-X-Men fight over what should be done.

This issue is a kind of showdown as all the players gather on Utopia, the now abandoned home of mutants.

Again, I don't want to give anything away but we now have two Jean Greys, two Cyclopses, and one Emma Frost all in one location. Just imagine how much fun that is. 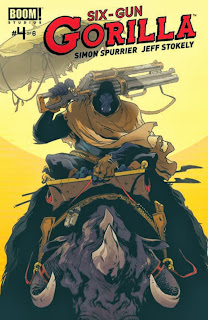 Once again I find myself in the awkward position of wishing this was an ongoing series rather than a 6-issue limited run. Like many things in this world, I'll have to be happy with what I've got.

Blue and Gorilla argue the meaning of life (seriously) as they try to survive on the Blister world all-the-while being pursued by a creepy government hired-gun and a rebellious army. Oh and there is a load of stuff happening on Earth too but I only have so much time to write these things, you know?

Jeff Stokely deserves an honorable mention for his artwork. His style is expressive and kinetic but I particularly loved the police officers he created in this issue. They're absolutely ridiculous and reminded me of some of the best stuff 2000AD would offer. Brought a big smile to my face. 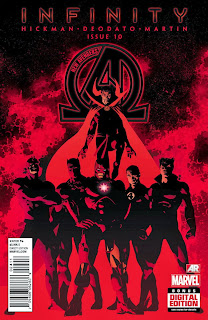 Oh what a tangled web we weave, Mister Hickman.

It's probably safe to say that Marvel's Illuminati are fighting a war on three different fronts. 1) The Earths of parallel universes crashing into ours. 2) Thanos waging an intergalactic war to find his son. 3) Each other.

While both 1 and 2 are Earth destroying problems, it always seems like it's 3 which will really stop them from saving the day.

Also, Namor and Black Panther totally belong on Days of our Lives at this point. The levels of bitchiness and silent glaring is amazing. 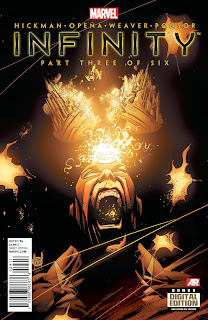 The big battle is still raging on and shit gets real as the rebellion is betrayed by one of it's own. Don't despair though, Captain America is still on hand to be the big bad-ass that he has always been.

A bonus to the team is that everyone finally remembers that the new guy called Starbrand is still hanging around and may be useful for something. It took about 6 months but they actually figured out a use for him.

Black Bolt lays down the law like a boss. 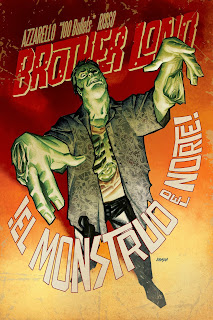 The interesting thing of this is that the writer is trying to create a story where we're horrified that a church is being influenced by a criminal gang. However, being Irish, I have never seen the church as anything other than a criminal syndicate so there is a certain aspect of this series which really doesn't work on me.

On the flip side, there is a running theme of redemption throughout and that is definitely appealing. From Lono, to the priest, to the young gangster Paulo, everyone is struggling to atone for their past and to make a brighter future. Some characters are doing better in their journey than others.

There has been a bubbling undercurrent of violence and while we have seen some examples of it, you can tell that it's nothing compared to what we're going to get come the end.
at 16:14