As I'll be leaving on a jet plane next Wednesday for Dragon*Con, the comics section of this site will take a break for a week but don't worry, I'll be back the following week with a catch-up, super-sized edition with the two weeks combined! Excellent. 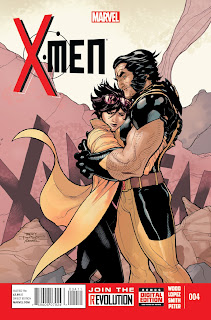 This issue has two different stories running side by side. One is Jubilee taking a tour around her old haunts as a child with her new adopted baby. The other is the team on a rescue mission to stop a plane from crashing. So there is a little bit of everything.

Jubilee brings Logan on her trip. With Wolverine being the Batman to her Robin it's a nice place to go, story-wise, as it both shows how young she still is and also a strong link to her past as she contemplates her future.

The team's rescue mission may seem mundane in comparison to most superhero struggles but it's a great place to show team dynamics and for some of the characters to try and get to grips with how they feel about each-other (i.e. Storm and Rachel Grey's current gripes). 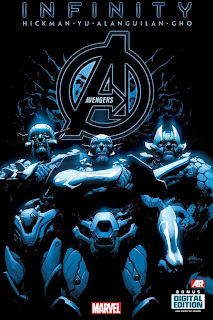 Some comic book artists have a real problem with faces. Or to be more precise, they have a problem drawing different faces. To make them distinguishable from the person beside them. Yu is one of those artists.

Luckily, his action scenes are so dynamic that you can forgive him. But it is definitely a pet peeve of mine (and if you've been reading these segments since the start of the year, you will have noticed it's one of many peeves). This massive battle through space is a chaotic and beautiful thing. The colourist Sunny Gho is a big part of that and I think it's only fair to give him the kudos here as sometimes I'm sure it could be easy to mistake certain similar looking characters if not for his fine work and design.

Oh, and the story is good too. 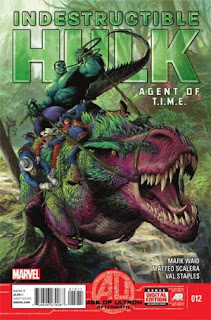 I thought that the time-traveling antics of robo-Banner and Hulk would be fun and gladly I was correct. As you can tell by the front cover, Hulk + Cowboys + Dinosaur = Crazy Delicious.

Is there much depth to any of it? No, not at all. But it results in enough visual candy and humorous dialogue to make it worth it as an adventure.

I'm increasingly coming to believe that Mark Waid's run, while a good read and distinct in it's approach, is a very shallow story. Sometimes elements come together and offer some deeper thinking but those moments are so quickly thrown aside that I couldn't really recommend the series to anyone but the most casual of comic readers.
at 16:16