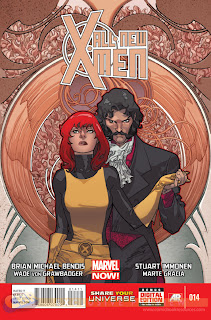 The fun continues as Jean Grey once again messes up for something like the 12th time. The catchphrase for this comic should be someone shouting "Jean!" and then rolling their eyes. Admittedly the previous option of past-Cyclops shouting "but I'm not a jerk!" wasn't appealing either.

Bendis is writing lots of fun adventures here. Despite the pace being very slow, it's still a great read. Immonen sexy art doesn't hurt either. And I don't mean that he is drawing sexy people, I'm saying that his art arouses me. Yup, deal with that image.

Another part that I'm enjoying is the reverence that everyone gives the original team. It's nice to see these kids being treated the same way that Captain America gets treated. Like they're heroes. 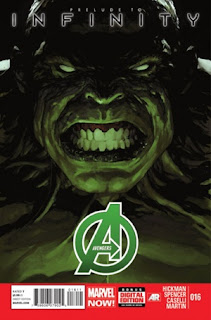 It has all gotten a bit much for Banner. The alien invasion, the big bugs growing from pods, the pressure of sciencing his way through the attacks. Sometimes you've just got to smash stuff, you know? But he's stuck on the S.H.I.E.L.D. helicarrier for the time being so we won't get to see him punch a bad guy until the next issue at least.

Moe A.I.M. shenanigans this issue which is always good. They're a bungling group of evil-doers which I can't seem to get enough of. It's something to do with their helmets, I think. It makes them the perfect goons.

As for all this Prelude to Infinity malarkey at the top of the cover, I really couldn't care less. I think I'm over "events" besides, this event just seems like part of the story anyway. 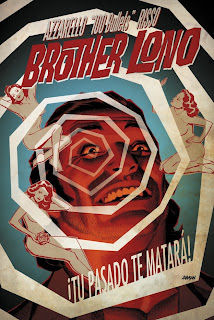 Azzarello's shtick, his signature, is writing characters with low morals. And if he does write a character with high morals, well, don't go thinking they'll have a happy ending. Good guys definitely finish last in Azzarello's world.

This spin-off comic is about the sleaziest, evilest, crookedest (?) character from the 100 Bullets world, Lono. Lono was a mean motherfucker but we find him here as a Brother working for an orphanage in a tough part of Mexico.

He's obviously trying to find salvation, or at least some atonement, which can only mean that this little story is going to end badly. With lots of blood. And probably a hooker or two.