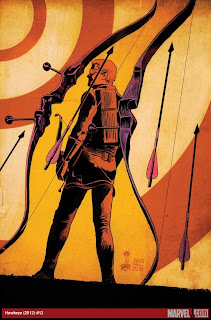 The wonderfully personal story about a man who fights crime in tights continues. This issue follows Barney Barton (Clint's brother) as he comes up against some familiar bad guys while also giving us some flashbacks to his youth with the eponymous hero.

The level of earnest emotion in this issue is rather alarming. I got a bit upset, I'm not going to lie. Maybe troubled families are a soft spot for me but whatever the cause, it's fantastically written work. I've said it a million times, but once more isn't going to hurt. Matt Fraction is killing it on this comic. Killing it.

There is plenty more Hawkeye on the way too. The annual is out in two weeks and then the next issue is only 3 weeks after that. Huzzah! 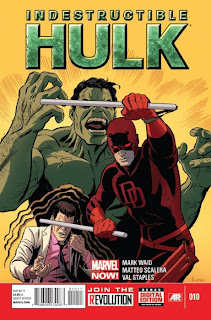 I've never seen Matteo Scalera's work before his run on this and I have to say I'm quite impressed. His interior art is kinetic and very pleasing to the eye. He does a screaming Hulk especially well.

Waid's highly competent run continues although his style of stories are starting to grate a little. He has arcs that start and end within two to three issues which is pretty standard but they seem so stand-alone with so very little connecting them, it's becoming a bit "monster of the week" (to steal a televisual term). Sometimes that works, but with all the artist changes added on top it makes everything feel disjointed and takes a little satisfaction out of the whole thing.

To reaffirm my point, next month sees Hulk travel through time. So, you know, that will probably be weird. 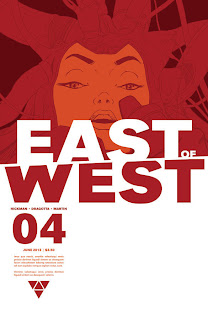 I'm not sure I want to keep reading this. I'm not excited about it. It's definitely good. It's well written and has great art so it's not the comic's fault. I'm just not convinced that it's the type of story that I'm particularly bothered with.

I've never been very good at break-ups. So often the "it's not you, its me" line is appropriate although never appreciated when uttered. I tend to drag the relationship out longer than it needs to be and then when the whole thing is in it's death-throws I finally man-up and put a bullet in it.

That may have been more personal information than you need but I was so unwilling to write about the comic itself that I used this bad metaphor to fill up the space where my thoughts would usually go.
at 23:21