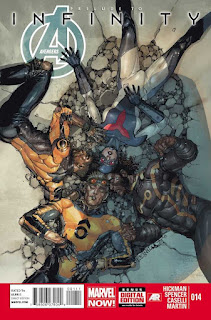 Apparently this issue is the "prelude to Infinity". I have no idea what Infinity is. I'm assuming it's some sort of "event". If I was a professional in any way I'd look it up, but this is a blog and I figure if I start doing that sort of thing I may get ideas above my station. It's like spell-check. Once you start, you'll be lifting your pinky finger when holding a drink and cleaning your monocle profusely. No thank you.

To be honest, I don't see how it's a prelude to anything other than the next issue of Avengers. It's very similar to most of the issues this series. I don't know. Am I getting jaded? Possibly.

And no, "getting jaded" does not involve gamma rays. Kids these days... 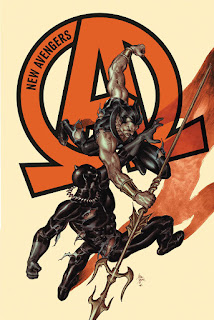 This has taken a bit of a sideways step. The past half dozen issues have all been about the parallel Earths crashing into ours but now that seems to have stopped and we're concentrating on a looming war between Atlantis and Wakanda. That's cool and all, but it took me by surprise as it's a very big shift in attention and drama in comparison to the "we're all doomed" vibe previously.

On a side note, Black Panther and Namor are two characters I enjoy for their pompous arrogance and regal righteousness but I would never read a solo book of theirs because I don't find them that interesting as people. Love to see them in group books though. 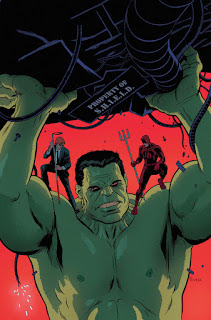 Oh yeah. This is more like it. After what was a pretty disastrous couple issues with Simonson, we're back to kicking ass in a major way with some wonderful art by Mattero Scalera.

We find out that Banner's "sponsor", of sorts, is Matt Murdock and while visiting New York on a mission with SHIELD they decide to catch up and hang out in the way that two super-heroes usually do. It's a really fun issue, lots of capering, and sets up another by introducing a villain that we don't often see against our two protagonists.

I really liked this one and so if I had an award for my favourite read of the week it would go to this. You may imagine the award to look like a big gold star with the words "approved" stamped across the middle of it. 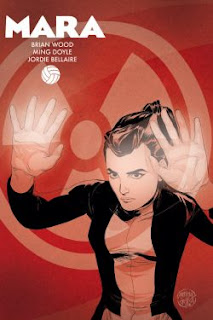 Mara is an interesting take on the super-hero origin story as it could easily turn into a super-villain origin story at the drop of a hat. There are no ideals, no greater moral imperative. It's about a volleyball star who suddenly becomes Superman and plays out as ambiguously as that probably would if such a thing were ever to happen in real life.

I await the final issue next month with an open mind and maybe one eyebrow raised in a Vulcan-like inquisitive stare.

It wouldn't surprise me if this was made into a movie at some point. Just saying that now so I can possibly quote myself in a few years time as being a genius. You heard it here first, folks!
at 17:35