Only one comic that I regularly buy came out this week so I took a chance on a couple comics I knew nothing about but liked the look of in the shop. Lets see how I got on... 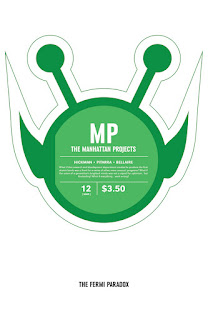 Sometimes I wonder what the families of the real-life characters from this book think of it. Or even if they're aware of it at all. Enrico Fermi is portrayed in this book as a mentally dull child who is killed and cloned by a homicidal alien. Considering he's a Nobel Prize winning physicist in reality, it's a comparison that I'm sure could ruffle a few feathers of a grandchild somewhere. Or, maybe it's so ridiculous that nobody could take it seriously.

Whatever the reaction, even Fermi's family couldn't deny that this is a fun, inventive, and always interesting comic book. One I look forward to every issue.

This month, another danger from within threatens the team and blood gets spilled again. The usual. 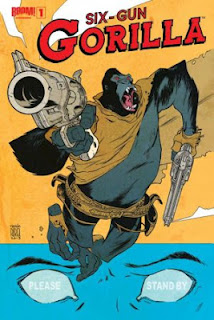 I'm not going to lie, I bought this entirely based on the front cover (by Ramon Perez). Just look at it though. Can you blame me?

The inside is pretty great too. It's an alien world where people are fighting in an old-west/American civil-war style battle. Some of the grunts are hooked up with eye cameras and are beaming live, gory entertainment to the folks back home. This story follows one such heart-broken grunt who manages to survive the first wave of attack (unusual for a man in his division) and gets himself into a whole heap of trouble. Who comes to his rescue? None other than our title character. A pistol wielding, poncho wearing gorilla.

If this thing doesn't sell a million copies in the first week there is no justice in the world. I'm just sad to find out it's only a 6 issue story. I'll keep you posted for when I start the "Bring Back Six-Gun Gorilla" campaign. 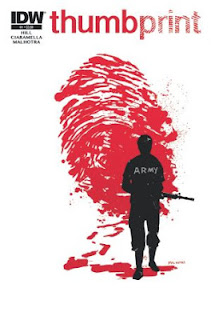 IDW pulled a very sneaky trick on me. You'll see in the top left corner of this comic a list of names. Traditionally these would be the names of the people involved in the comic. Now, it's not shown on this image I found online, but in real life "Joe Hill's" is also printed above the U and M of "thumbprint". So, with these two contributing factors, I had assumed that I was buying a Joe Hill comic. My first Joe Hill comic too (I had heard good things about him). Colour me surprised to find out that the only connection is that the story is based on his novella of the same name. Bugger that.

Now that I've gotten that off my chest, is the comic any good? It's OK. It is to be commended for involving a lot of important issues; women in the military, the mistreatment of prisoners, veterans' readjustment to society, etc. For whatever reason currently, I'm not hooked. We'll see how it goes.
at 16:17