It's a slow week for comics. Only one issue I wanted to pick up. So I used this as an excuse to pick up a trade along with it. 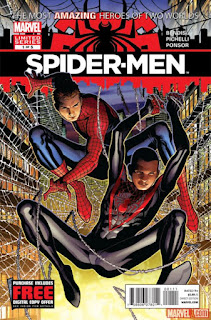 You may have noticed, after five months of writing this, that I don't normally buy Spider-Man comics. There is a reason for this; Spider-Man is my favourite comic book character. "Oh, but Aaron, that makes no sense". Try reading a lot of the recent Spider-Man stories and you'll probably understand why.

I have never read any of the Miles Morales Ultimate Spider-Man comics either. Not out of disdain, just purely because I never bothered.

So taking these two points into consideration, it's rather a surprise to say that I absolutely loved this story. It's pretty much perfect. You don't have to be up-to-date in either character's stories to enjoy it, you're filled in with everything you need to know. It's just a wonderful one-off (read as: 5 issue) story, self contained and beautifully told. Well done. 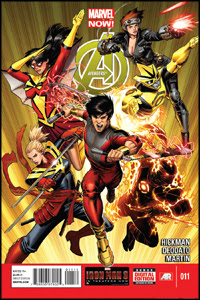 Shang Chi is a hero that I'm not too familiar with. He has always just been a Bruce Lee knock-off in my mind. This is the first issue that we get a little bit of spotlight on him since his drafting in to the Avengers and while the knock-off title isn't untrue, it's also not necessarily a bad thing.

In fact, I quite enjoyed the whole team together on this one. Cannonball and Sunspot make a good comedy double team. Jessica is the consummate spy opposed to Black Widow who is a little/lot more ruthless. Capped off with Captain Marvel as the tough-as-nails leader. It's a great mix.

This is a nice one issue mission that they have and there are so many little moments of goodness I'll have to limit myself to mention only one. AIM agents going drinking with two super-heroes because, fuck it, they're in Vegas. Pretty golden moment that would feel more at home in something like The Venture Bros so it was brilliant to see it here.
at 13:54