Sorry about the delay this week folks, a rather nasty head cold meant that I couldn't think straight long enough to write this. Luckily though there are only two to review this week so despite still feeling a bit groggy I feel just human enough to get it done. 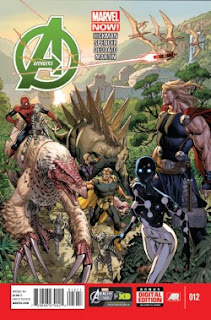 Trips to The Savage Land are always a favourite of mine. Since reading about Spidey's trips when I was young and watching the X-Men's adventures there in the 90s cartoon it has been a comic destination of choice in my eyes.

This trip involves some of the typical local beasts but also some more mysterious brooding from Hyperion (I'm getting a whack of The Sentinel from him), some sinister Superior Spider-man-ing, and a big bad guy reveal, so as you can imagine I had a ball.

Interesting to see that the issue was part written by Nick Spencer. I feel like the parts with Hawkeye and Spider-woman were done by him but that's just a guess. Despite this story often feeling a little scattered I'm enjoying it a bit more than New Avengers. 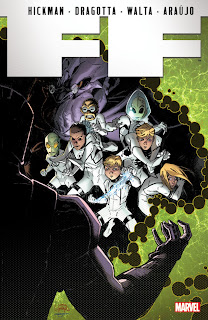 The final volume of trades for Hickman's run on the Future Foundation. These collected issues read a lot like one-shots more so than the previous volumes but in a sense this was Hickman's farewell to Marvel's first family so more room was left to tying up loose ends and layering on the sentimentality.

There is a fun issue about Peter Parker and Johnny Storm's room-mate agreement, lots of Moloid madness, and a really sweet goodbye from Future-Franklin (that's right folks, it's not just Bendis on All New X-Men messing with our minds via time-travel).

I'm really going to miss this series. Hickman created such a fun group and got a tone so perfect I'm not sure it can be re-created by another writer. Genius stuff.
at 17:52