Another slow week for comic releases (at least, the ones that I'm interested in anyway) so I picked up a trade of a series I love. 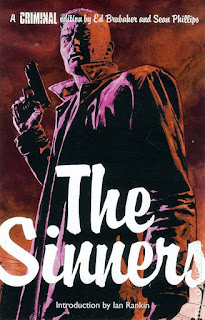 I'm a sucker for a good noir comic and the Criminal series is one of the best. Each volume is pretty much stand-alone (although there are nice links throughout like the bar that everyone frequents) so despite having read 1, 2, and 3, but not 4, I knew it was OK to grab this one while in the store.

We follow Tracy Lawless (a dude, despite the name) as he tries to work off his brother's debt with a mob boss, investigating a slew of executions across the city's underworld. Not noir enough for you? Well we also have a dame who he shouldn't be sleeping with, a military cop out to bring back our AWOL anti-hero, and a fatal meeting with some Triad members. Yup, I'm pretty much in heaven with this thing.

Not only is it superbly written but Sean Phillips understands the importance of shadows and gets the tone right all the way through to the bloody end. 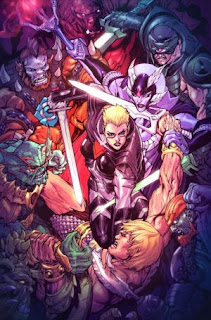 Of lesser quality is this thing that I continue to buy but can't explain why other than "it might be a laugh".

This thing is exposition heavy. I mean, it's exposition obese. And the dialogue is painful. The art is mostly pretty though and I must at least give credit that they're trying to get a lot of stuff in there.

Right now we're being presented with a whole "Mystery of Adora" kind of story, which is a little silly considering all the fans know she's She-Ra but let's go along for the ride and see if it's worth it in the end, eh?

I'm betting that it won't be.