Man, yesterday was a great day for awesome comics. Weirdly it was also all about Jonathan Hickman with four of the five comics I bought being written by him. That 5th comic is a brand new one from Mark Millar and Frank Quitely. 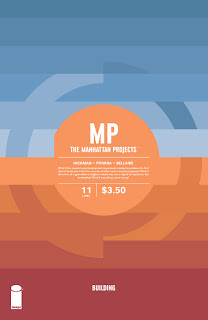 Considering how fucked up and homicidal this comic has been most issues, this one is actually a rather sweet story in comparison. There is still the usual violence and plots from deranged maniacs but there is also a tale of friendship and love. It's a welcome break and it's inclusion highlights it's previous absence, something that I wasn't conscious of before but now seems glaring to me.

Since we last saw them, a sizable chunk of time has passed by and our crew have now set up a base on the moon. They're all feeling rather smug about themselves and try to decide where to go from here. Considering "here" is outer space, you can only imagine what kind of plan they come up with.

We also get some back-story on Harry Daghlian, a man I must admit I had never heard of previously. Considering he's an irradiated skeleton floating in a space-suit now, I probably should look him up. 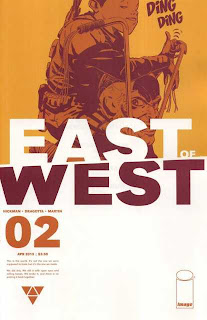 What is it about Hickman and Nicks?

Anyway, this was actually sold-out in my local comic book store (Forbidden Planet, Dublin) at 3pm when I arrived. Considering the first issue was relatively easy to pick up, it seems word is spreading fast. The only way I was able to get it in the end was asking the always helpful staff to give me the issue on display in the window. Boom! I felt like a bad-ass walking away with the only copy left in the building.

How is the issue? Good. We're being teased the information slowly but essentially there is an Armageddon Cult (nothing to do with the movie) who are teaming with the 3 remaining Horsemen of the Apocalypse to, it seems, kill Death in this futuristic western world. Yeah, it's all a little vague and crazy right now but that seems to be essentially what I'm gleaming from it. 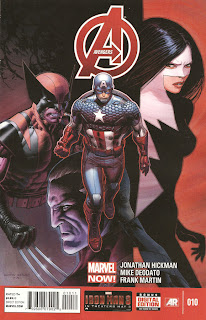 This is, without a doubt, my issue of the week.

I think it's the set-up that makes it so satisfying. We saw previously that alien things had landed on Earth in different locations and created weird biological environments. One particular location was in Canada so of course Omega Flight became involved.

It wouldn't be a comic book if something didn't go incredibly wrong and the Avengers are sent in to investigate.

It's all pretty damn exciting and the pace is excellently built to a frenetic point and then... well that would be telling. Needless to say it's all very intriguing and if the danger continues unabated, this is going to be an epic battle for Marvel's A-Team. This run could become a future classic for the brand. 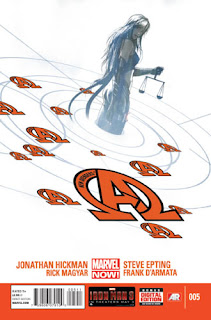 If you read these two Avengers books side by side, it's hard to comprehend that they're both happening at the same time. I believe one of these (most likely this book) will end in a complete reset of the universe. It has to. I can think of no other way they can possibly go on without doing it.

Once again an Earth from a parallel dimension threatens to crash into this Earth unless it can be destroyed. This will go on until the team can figure out a way to stop it or until this Earth is demolished. At the moment these are the only options available. Until they figure it out they have to blow up planet after planet and it's all a little unnerving.

Next issue sees the gang go to Latveria... *giggles with joy*. 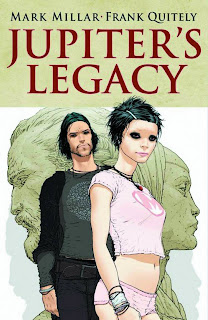 Mark Millar is (as the, previously mentioned, Forbidden Planet staff member put it) comic book Marmite. You either love him or hate him. I've always remained indifferent due to sheer avoidance of his work. I can't recollect reading anything written by him before. I will say though, he sounds like a complete cock in interviews.

Frank Quitely is roundly considered in the comic book community as a god. Or a demi-god at least.

The story revolves around a clutch of super-heroes and their children as the changing of the guard seems to be going badly. The kids don't quite have the moral fortitude of their parents.

So far it's a good read and Quitely's art is indeed gorgeous in parts so I'm officially on for the ride. Although I have been particularly bugged by the story's time-line being way off. People in their 20s in the 1930s do not have kids in their 20s in 2013. Just throwing it out there guys. You fucked that one up, Millar.
at 14:53