It's a quiet week. Only one of my usual comics have a new issue. As a result I took a chance and bought the first issue of something that I thought I would never buy. Lets see how we get on. 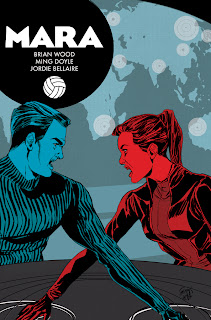 Everything is starting to form together now. All of Mara's new abilities are becoming apparent. Everyone thinks she's dead. The government have her on lock-down and plan to use her as a kind of nuclear deterrent. It's all taking shape.

There is an interesting part of this story that deals with the idea of freedom, or at least the idea of personally freeing yourself. Mara's powers give her that but also destroy ever other fabric of life that she clung on to. In a way, she had to destroy her life to find power in it, even though she didn't destroy it purposefully.

I don't know. I feel like I may be reading too much into it. It is one of those comics that begs to be over-analyzed and I like that about it.

One comic that doesn't need to be over-analyzed is... 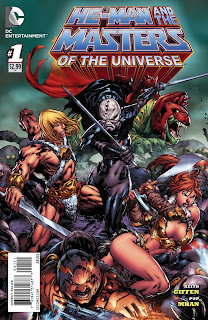 Like any man my age (an indeterminate age, in case you're wondering) I grew up watching the He-Man TV show and playing with the endless number of action figures. But that was a long time ago now and while I have fond memories of it, He-Man doesn't hold up at all as a show. So I picked up this as a bit of nostalgia and general curiosity but without any expectations of quality.

Giffen seems to have done his homework. This first issue is steeped in He-Man history with the death of the Sorceress who gave He-Man his powers apparently occuring before this story begins and lots of talk of Teela's weird past. A past, and a character, I had no recollection of and had to read-up on (with a massive thanks to this article) to make sense of anything going on here.

As a result we have a comic that is clearly geared towards the hardcore fanboys but not necessarily accessible to those with a passing interest. It feels like they're missing out on a trick because any young person who didn't grow up on the show will have no idea what is going on and probably won't come back. I haven't decided yet if I will either.