It's a good week for comics. Any week with both #Hawkguy and Saga are good weeks. 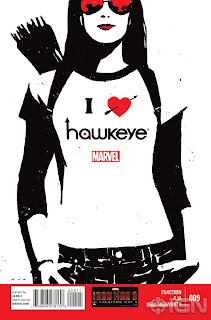 This issue kinda marks the end of innocence. In previous installments we've seen Hawkguy be the lovable rogue, getting into scrapes and doing the right thing. But it seems that all his careless adventuring has gotten him into a big hole that he's struggling to get out of.

For the first time we start to see the consequences of Clint's lifestyle. His personal life is falling apart and he doesn't seem to care. He's almost doing it on purpose. But what is he punishing himself for? That hasn't been made clear, yet.

What is clear, though, is that the stakes have just been raised. Any fan who reads the last page and isn't affected is probably heartless or just a robot. The next issue can't come soon enough. 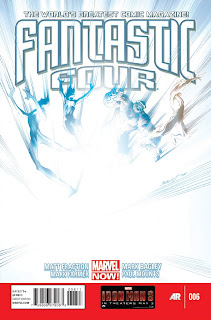 As this is the last issue I'm picking up of this series I thought maybe I would try to end on a positive note. I've been ragging on Fraction's run with Marvel's first family for the past couple issues as I've struggled to get to grips with the story.

I think Fraction has written a really good all ages comic. I would have no problem giving it to a nerdy kid with an interest in science. It ticks all the boxes for that demographic.

I think the real killer for this series and I was just it's timing. It came on the back of a stellar performance from Jonathan Hickman and could never keep up. This is a perfectly adequate comic. Unfortunately it's living in the shadow of a classic. 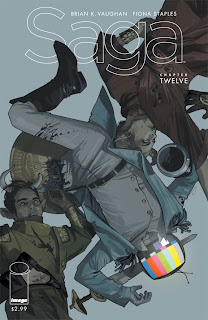 Thank feck for the little drama that happened with Saga's release this week. I was running out of things to say about how amazing it is.

Comixology didn't give it to Apple to release online because they thought it wouldn't pass the censorship guidelines for the app. There are two small images of a man giving a blow job (they appear on the face of Prince Robot IV, in case you were wondering) and due to how graphic they are (big hard dicks and lots of semen, in case you were wondering) they thought it wouldn't fly and so therefore didn't bother.

This is what I gather, anyway. The message has been twisted a number of times since the debacle was first noticed. It seems to have been all cleared up now and it has been released on the Comixology app but it's interesting to note just how much of a cock up (pun intended, in case you were wondering) this has all been.

... in case you were wondering. 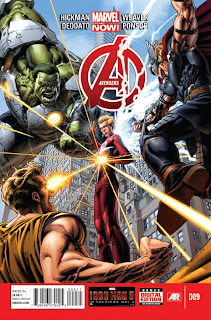 Ex Nihilo has been sneaky and set a little plan in motion that effectively will change the Earth forever. I know we hear that phrase in comics a lot but it's his actual plan. Physically change the earth and turn it into a conscious entity. Obviously our gang have to try and stop this evil deed but as I write this they don't really know about it yet.

Technically this is still the same story arc as issue 1. Eight issues later and it still feels like it's only getting started. To say that Hickman plays the long game would be a gross understatement. The guy is a genius at comic story telling. Despite the story still being teased out, this series has felt like there are a million and one things going on at once.

Hickman is not half-assing this, guys. He's using his whole ass, and possibly bits of yours too. Check your ass, folks, Hickman may have taken it.
at 14:52